Chelsea will look to return to winning ways when they will take on Brighton & Hove Albion at the AMEX Stadium in the English Premier League. The two teams played each other in the match week 20, and the match ended in a 1-1 draw. Chelsea currently sit in third place, and Brighton are also in the top half of the table. 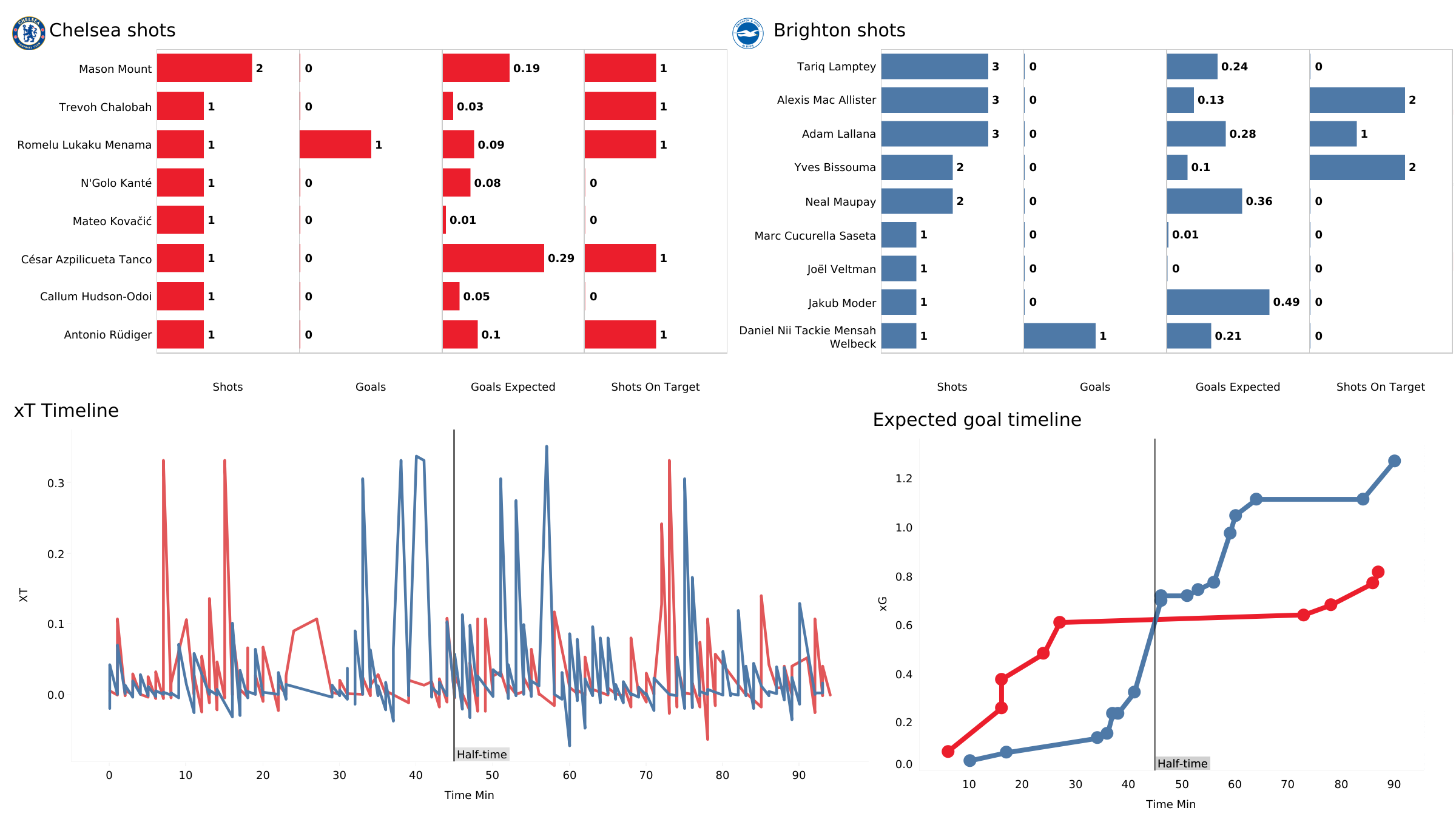 The last time these two teams met, Brighton turned out to be the attacking team in the match. The Seagulls had more possession of the ball and attempted 17 shots with a 29.4% shot accuracy rate. Chelsea, on the other hand, attempted nine shots with a 55.56% shot accuracy rate. The xT timeline shows that Chelsea gained some early momentum and created threats towards the start of the match. Brighton gained momentum towards the end of the first half and were the better side after the 30-minute mark. 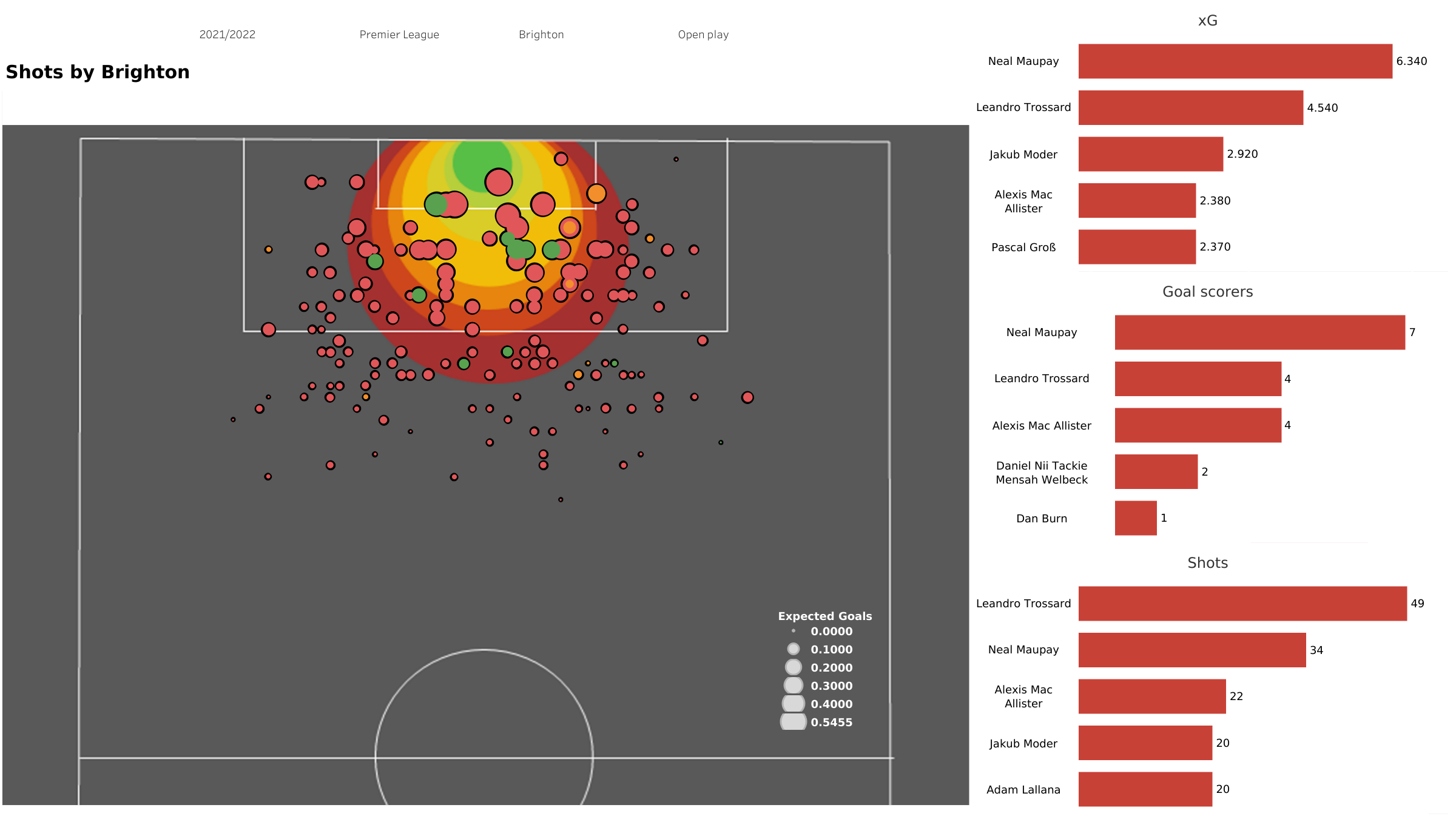 Brighton have scored 21 goals this season with a 27.46 expected goal rate. They have conceded the same amount of goals with a low expected goal against rate of 23.38. The above map shows all the shots attempted by the Seagulls this season. Graham Potter’s men have attempted 245 shots and managed to hit the target 82 times. 131 shots have been attempted from inside the opposition’s penalty box, and 49 have been on target. Neal Maupay is the highest goal-scorer for his team with seven goals and is followed by Leandro Trossard and Alexis Mac Allister, with four goals each.

Shane Duffy and Adam Lallana are the latest absentees for the Seagulls and are set to miss this match due to injury. Enock Mwepu is also out due to an injury, and captain Lewis Dunk is also nearing a return. Tariq Lamptey is also fit after he missed the previous match due to a groin issue. 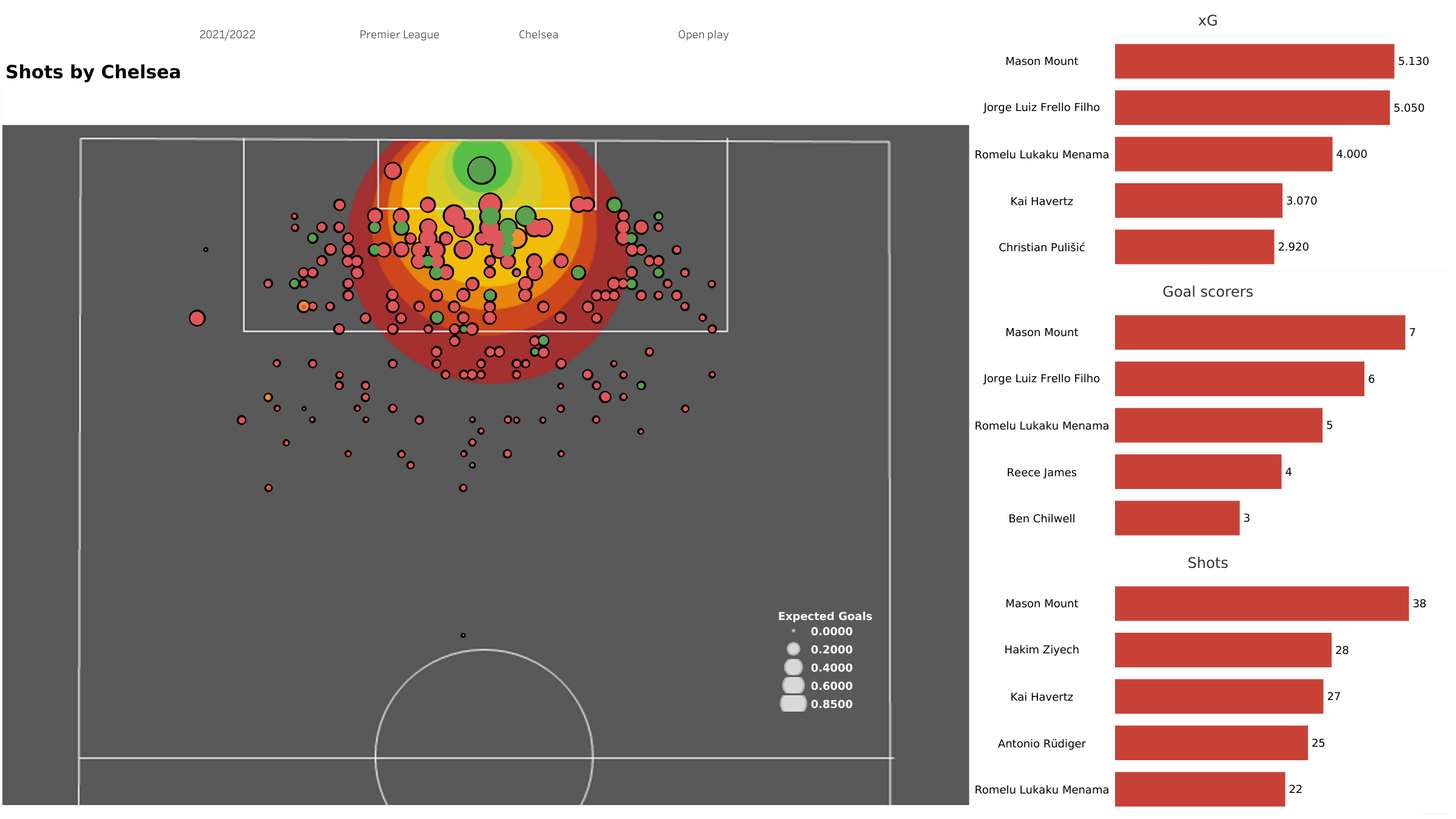 The Blues have already scored 45 goals this season and average more than two goals per match. The xG rate of the team is 38.94, with an average of 1.62 xG per 90. They have conceded 17 goals with an xGA of 22. Tuchel’s men have attempted 308 shots and managed to hit the target 118 times. 196 shots out of the 308 attempts have been made from inside the opposition’s penalty box. Mason Mount is the top performer for the Blues, with seven goals in 19 appearances.

Chelsea have a lot of defensive concerns as Andreas Christensen is still out with a coronavirus infection. Trevoh Chalobah has a thigh problem, and wing-back Reece James is a long-term absentee along with Ben Chilwell.

The loss against Manchester City widened the gap between Chelsea and the league leaders by 13 points. Thomas Tuchel’s men have lost the momentum which they had towards the start of the season. Brighton managed to earn a draw at the Bridge and will look to carry the momentum into this game. This is a must-win game for the Blues in case they want to stay in the title race.