Liverpool and Man City… here we come! After looking at the more tactical side of things in the last article, we carry on our journey to dominate European football. As mentioned, this save aims to take Chelsea to the peak of world football, and recently we have taken a big leap towards this objective. Before looking at what has been going on though, let’s recap what happened in the last few articles.

After a rather positive start to the season, we had reached the World Cup break on track with our goals for the first season. However, similarly to real life, we started to lose our form after the break. We were becoming extremely ineffective in our games, so I decided to change our tactical approach entirely. It proved successful, and after continuous adjustments, we had a great end to our first season in charge.

I briefly mentioned in the last article that we were quite busy in the January transfer window, and looking back, it was a great choice. With so many contracts expiring in the summer, our winter moves not only built a solid foundation going forward, but they immediately improved our quality on the pitch.

In this article, we will first provide a season recap, briefly going over last season’s results – spoiler, there was a BIG win. Following that, we will go over our winter and summer transfer windows, looking at where our squad stands. Finally, we will take a look at how the academy prospects are coming along.

As expected, we were unable to challenge for the Premier League in our first season. The board and supporters were quite disappointed, to my surprise. However, there was no chance of keeping up with Liverpool and City. Liverpool had 90 points and still didn’t win the league! Our squad lacked both the depth and the quality to compete with them. More worryingly, the side we inherited was terribly planned age and contract-wise.

All things considered, our first season in charge of the Blues was a success. We managed to finish behind Liverpool with 78 points, after a long battle with United for third place. The season proved long, and if we want to challenge for the title this season, as we are expected to, consistency and stamina will be key. 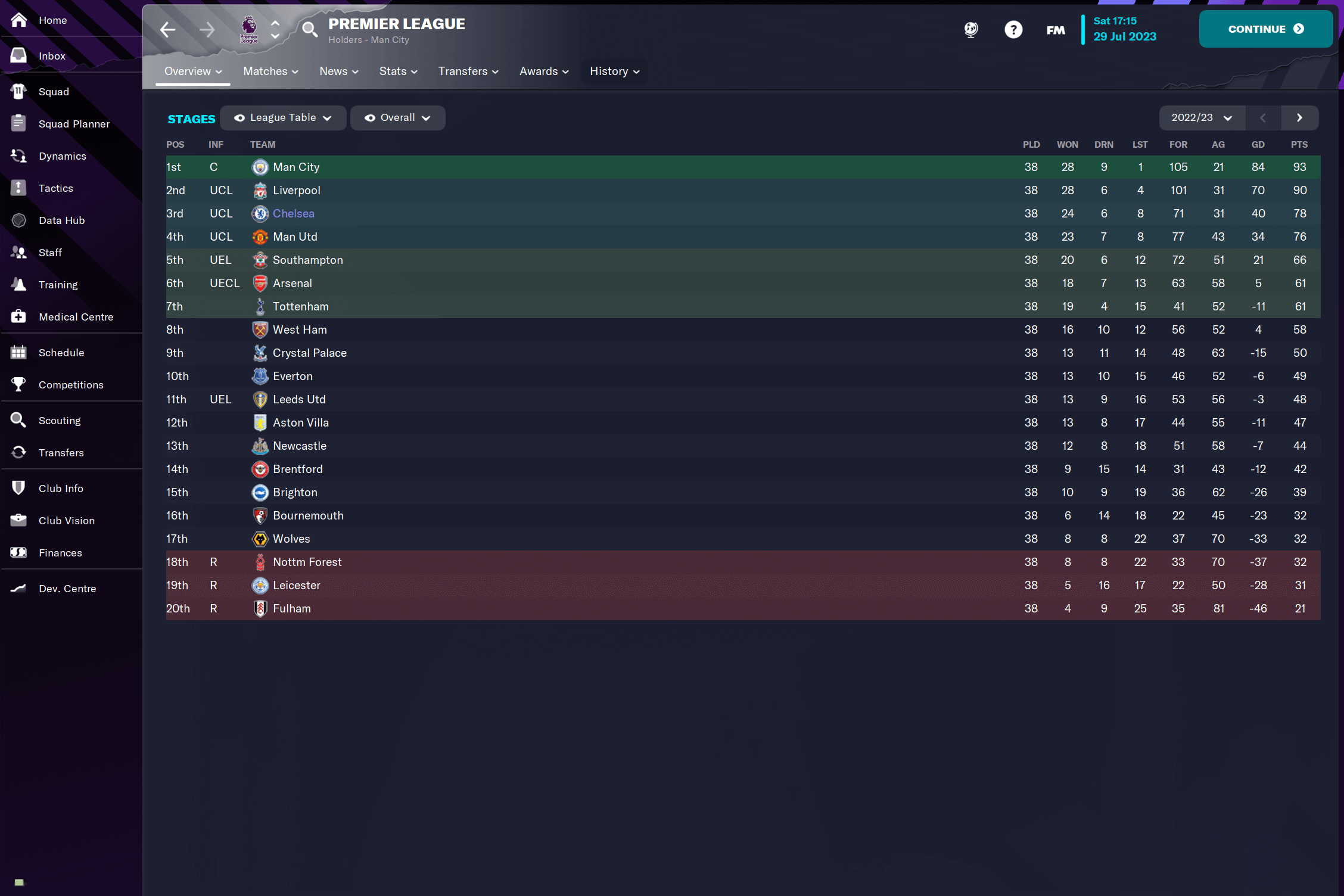 Elsewhere in the league, Southampton surprisingly finished in fifth place, especially considering they currently sit 20th in real life. Fulham, Leicester, and Nottingham Forest were all relegated, and our two London rivals finished 6th and 7th, with Tottenham (of course) missing out on European football. No surprises – London is blue.

Most importantly, so is Europe! We managed to win the glorious UEFA Champions League in our first season at Stamford Bridge. Hopefully, this is where the Tuchel similarity stops though.

The journey was far from easy. After drawing 2-2 with Real Madrid away, we dominated them at home. In the quarter-finals, I nearly suffered a heart attack. We convincingly beat Milan 3-0 away in the first leg, so coming back to Stamford Bridge, I thought we were easily through. I was wrong.

We somehow managed to lose 3-0 in regular time, conceding a last-minute equaliser on aggregate. I was obviously in disbelief, and I abused the berate shout for the entirety of the extra time. After losing all my hope, of course, we won on penalties.

We took care of business against Atletico Madrid, and in the final, we faced another Spanish side. We entered the final in great form, without losing in five games. Despite it being a close battle, we edged Barcelona 2-0 after some intelligent tactical tweaks in the second half. 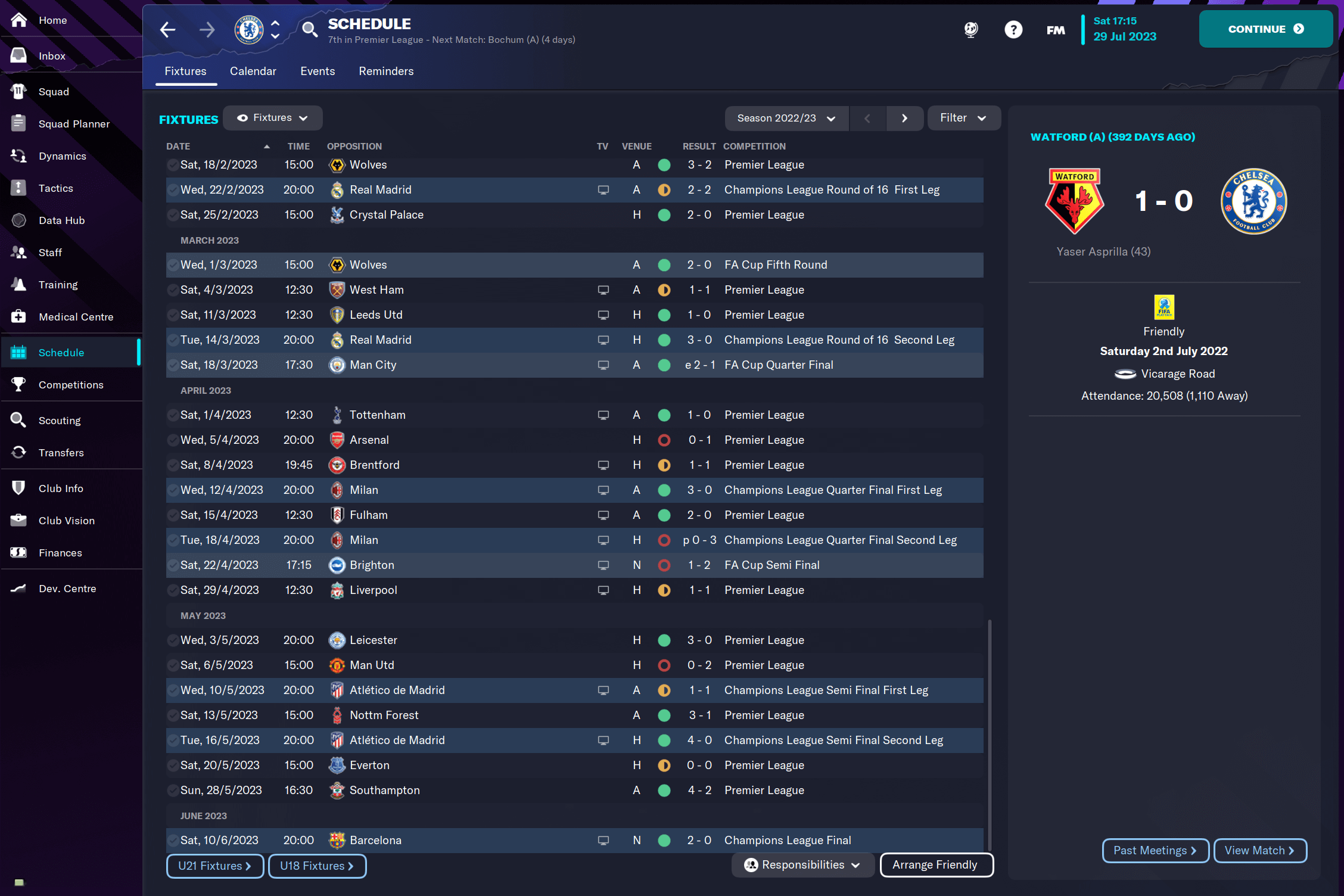 If we wish to challenge for the Premier League this season though, we have to be more consistent, especially in April. We were able to conquer Europe in our first year, with some undeniable luck. At any rate, it allowed us to bring in some fantastic players and significantly upgrade our squad. Going forward, the objective is to challenge for the Premier League and Champions League every single year, eventually dominating both competitions – a mix of Man City and Real Madrid, respectively.

Now let’s look at the squad. First, let’s begin by looking at what we did in January. We were able to sell Jorginho, even though the Italian’s contract was expiring in six months. To replace him, I brought Fran Beltran from Celta Vigo for £20M. I also sold Christian Pulisic, as I felt the American would not have the quality to be a part of my long-term plans. With that in mind, I brought in two new wingers.

As we only had two natural wingers, Sterling and Ziyech, I wanted two more, one for each side. However, I did not need them to immediately start and lead our attack, so I went for two younger players. The first purchase was right-winger Luca Orellano for £4.2M, and the second was Talles Magno for £10M. They were able to provide us with depth and a foundation for the future.

Finally, Thiago Silva and N’Golo Kanté left over the summer with expiring contracts. With the two and Jorginho gone, we had the perfect opportunity to rejuvenate and improve our squad in some important roles. Here is what our squad looks like now. 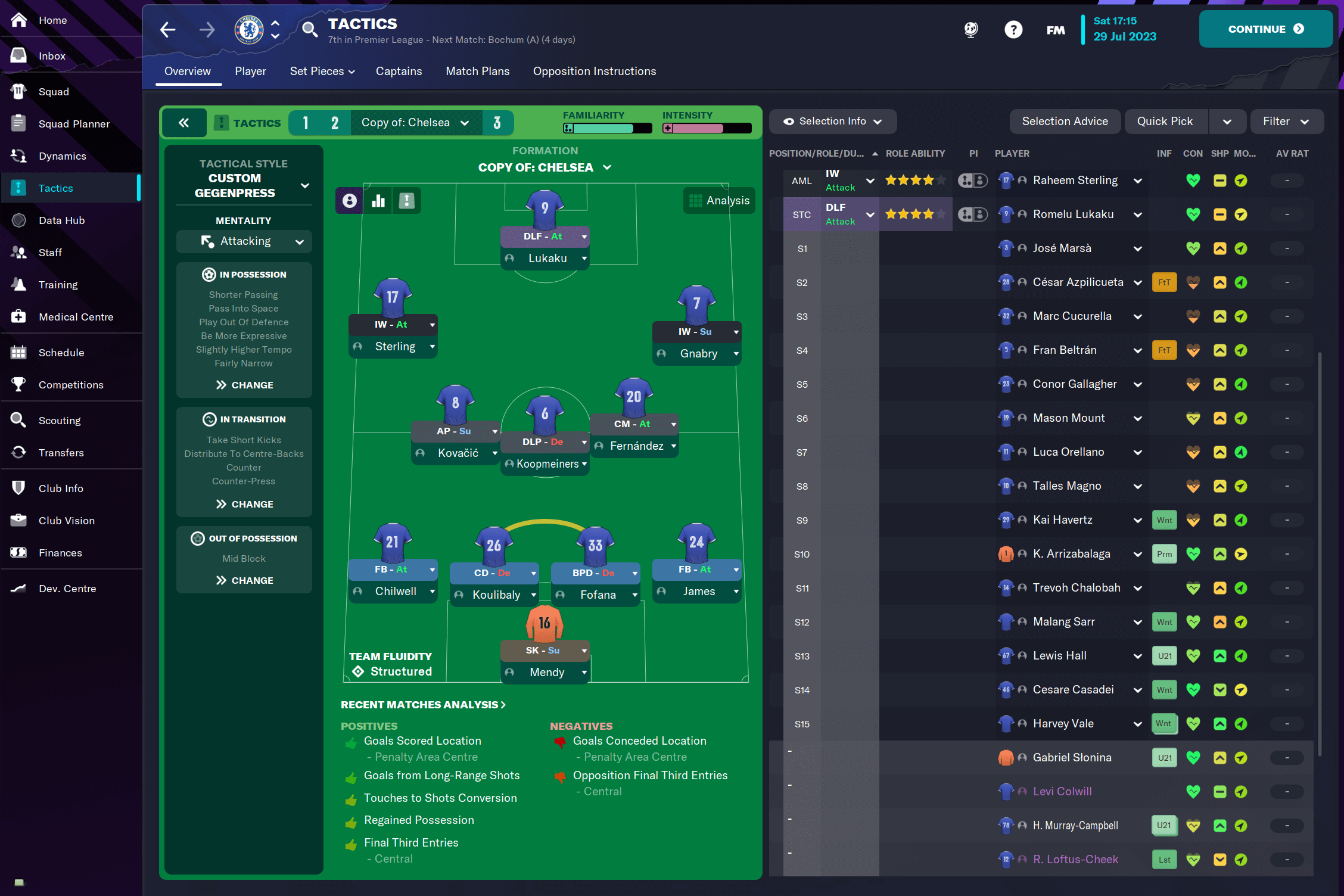 After winning the UCL and finishing third in the Prem, we had money to spend, and in FM, money solves all problems. Our first purchase was for £37.5M, which will eventually rise up to a total of £53M. The player was Teun Koopmeiners, a 25-year-old midfielder from Atalanta.

Koopmeiners’ media description is of a world-class midfielder, and rightly so. Looking at his attributes below, he has absolutely everything. At just 25 years old, he will the backbone of our midfield for years to come. Although it was an expensive one, it was important. Goodbye Jorginho, welcome Koop. 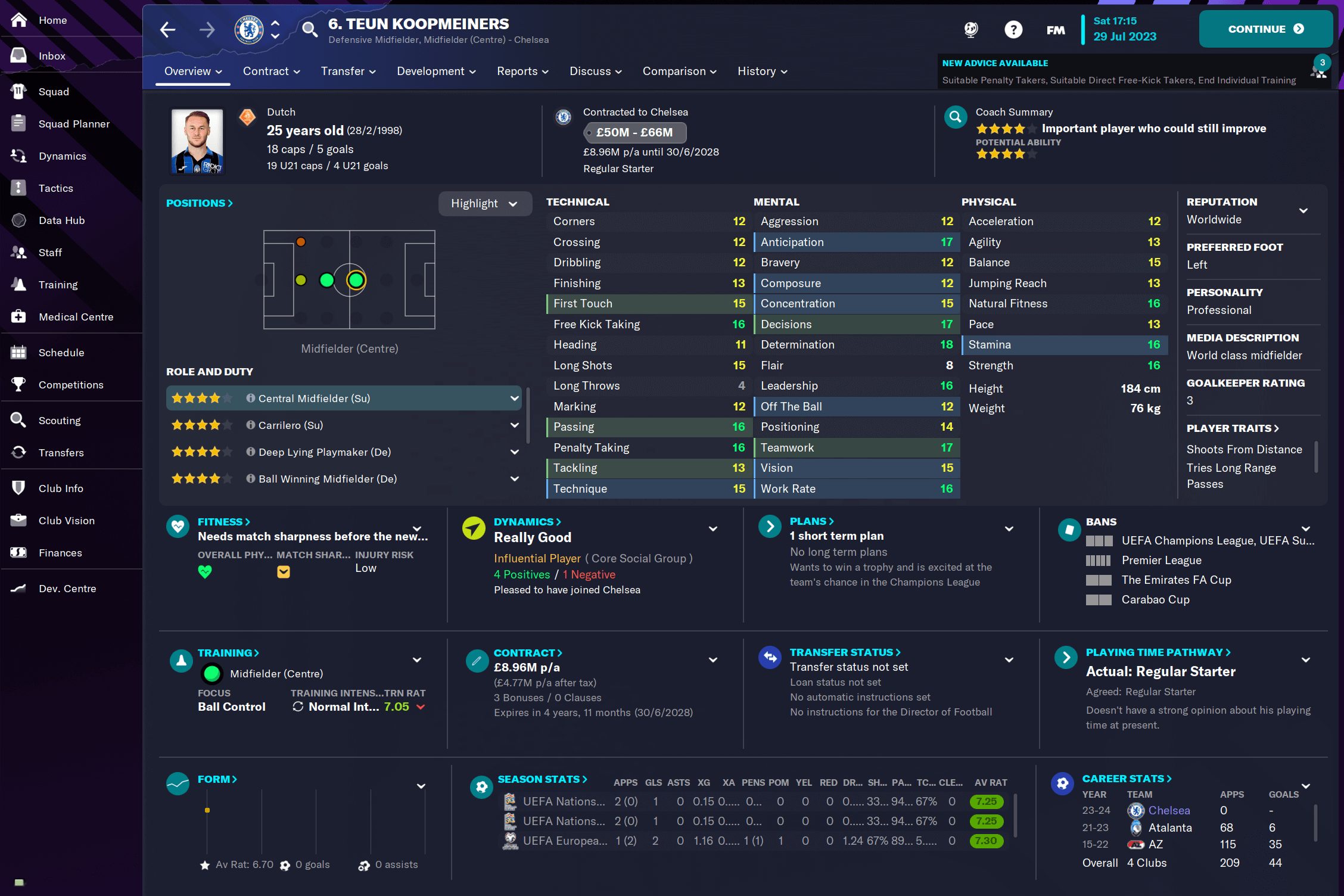 The next player needs no introduction, especially after the World Cup. Enzo Fernández joins us for only £30.5M. I say only because the Argentinian is 22 years old, already with unbelievable attributes. Along with Koopmeiners, he will be the core of our midfield for years to come. These two signings helped us drastically improve from the Jorginho-Kanté partnership, and in a trio with Kovacic, our midfield is world-class. On the bench, we still have Beltran, Mount, and Gallagher. Quality, youth, depth. What more do you need? 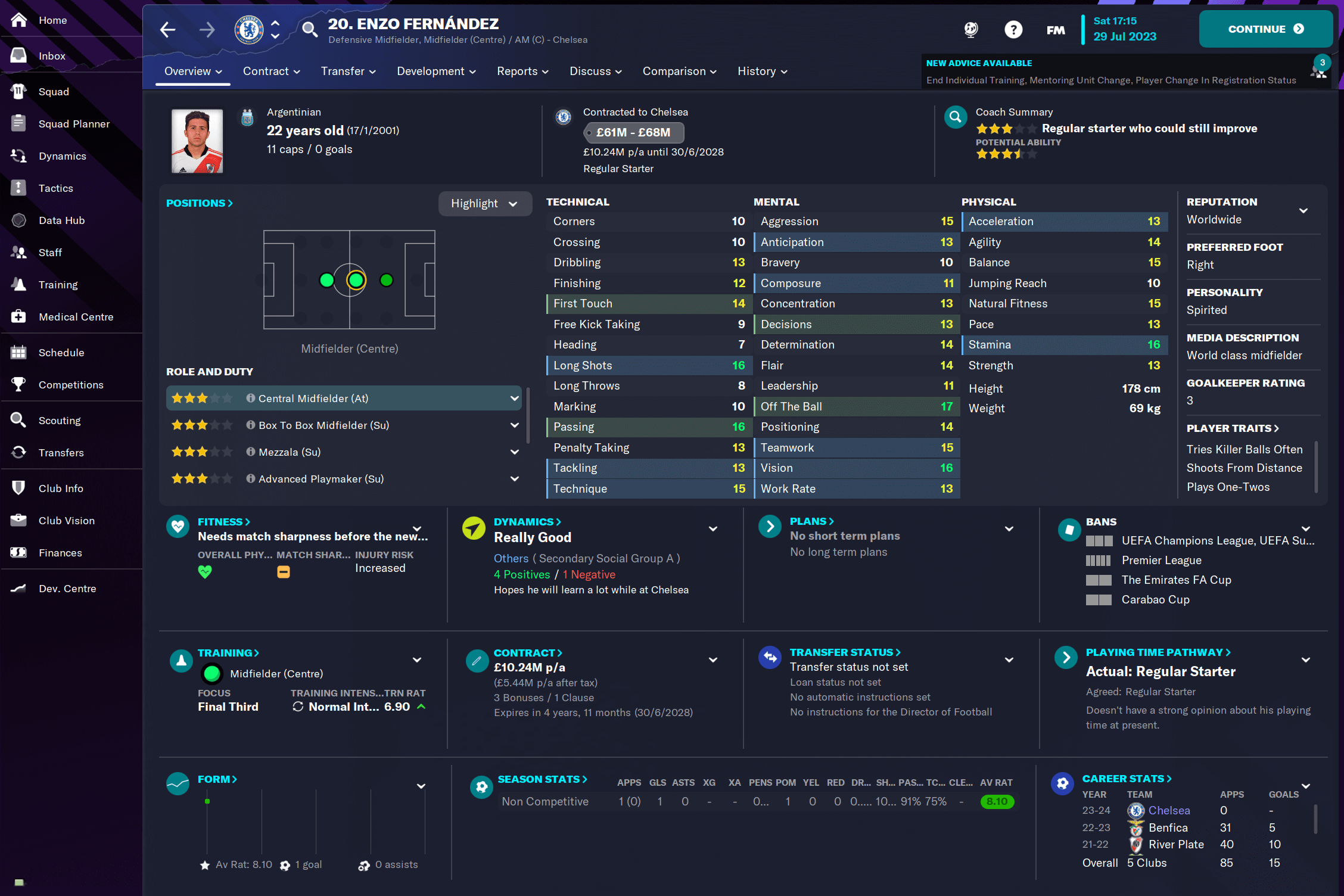 Our final signing of the window was a complex deal for Serge Gnabry. Ziyech was 30 years old, and in the last season, his performances were extremely disappointing. I felt the upgrade was needed, so I went after the German. In the deal, on top of £60M (I know), I threw in Ziyech and Aubameyang. It wasn’t for the value they offered, which wasn’t much, but for the fact that I was having an extremely hard time offloading these two players.

Finally, one of our biggest additions wasn’t a signing. Romelu Lukaku is back from Inter, and as long as I’m here (and he keeps scoring), he isn’t going anywhere. I am personally a fan of the Belgium international, and he scores a lot of goals – something we were missing from our number nines.

The upgrades are undeniable, and our squad looks extremely better in addition to being much younger. From now on, we can use our large transfer budgets to make precise and big signings, without having to worry about the core of our squad. The hard part is over, and now it is just maintenance. 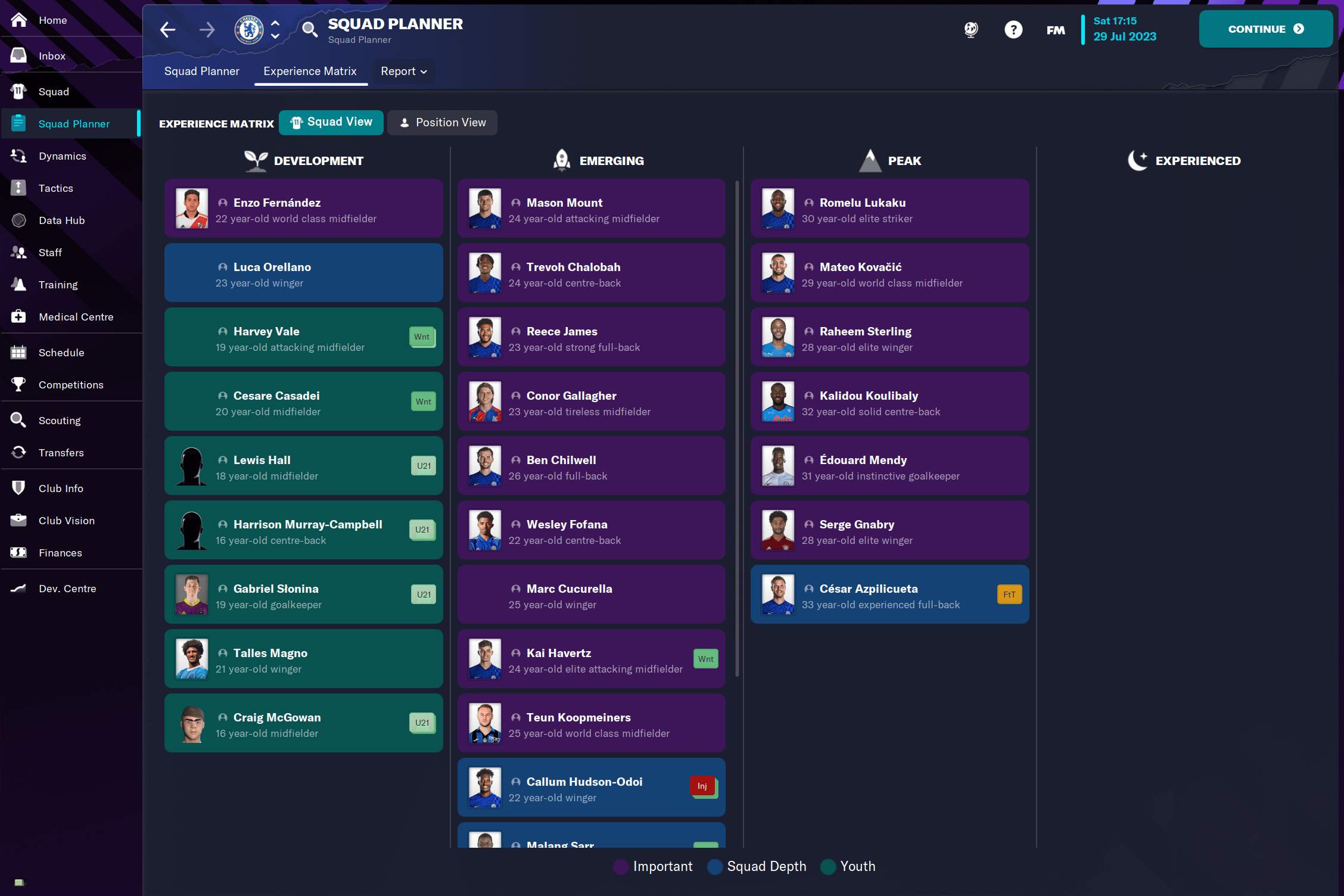 Our experience matrix looks something like this. The quality of our development players is extremely exciting, and the core of our squad is in the emerging section. We are young and with tremendous quality. We are ready to begin our domination.

Lastly, I wanted to go over a few youth prospects and how they are progressing. Levi Colwill continues to progress extremely well and was loaned out to Burnley for this season. Similarly, Carney Chukwuemeka was loaned to Nottingham Forest. Both are part of our plans for the future. Lewis Hall and Harrison Murray-Campbell will continue at the club, a part of the senior squad but playing for the U21 side. Hall’s versatility earned him a few opportunities last season, and both are very much in my plans for the future.

The youth intake provided us with some good prospects, but no one was more exciting than Craig McGowan. The Scottish 16-year-old is an absolute gem, already having fantastic attributes despite his young age. He will remain at the club, training and being mentored on the senior side while playing for the U21. He will get a few opportunities, especially in the cups. Needless to say, my hopes for the Scot are high. 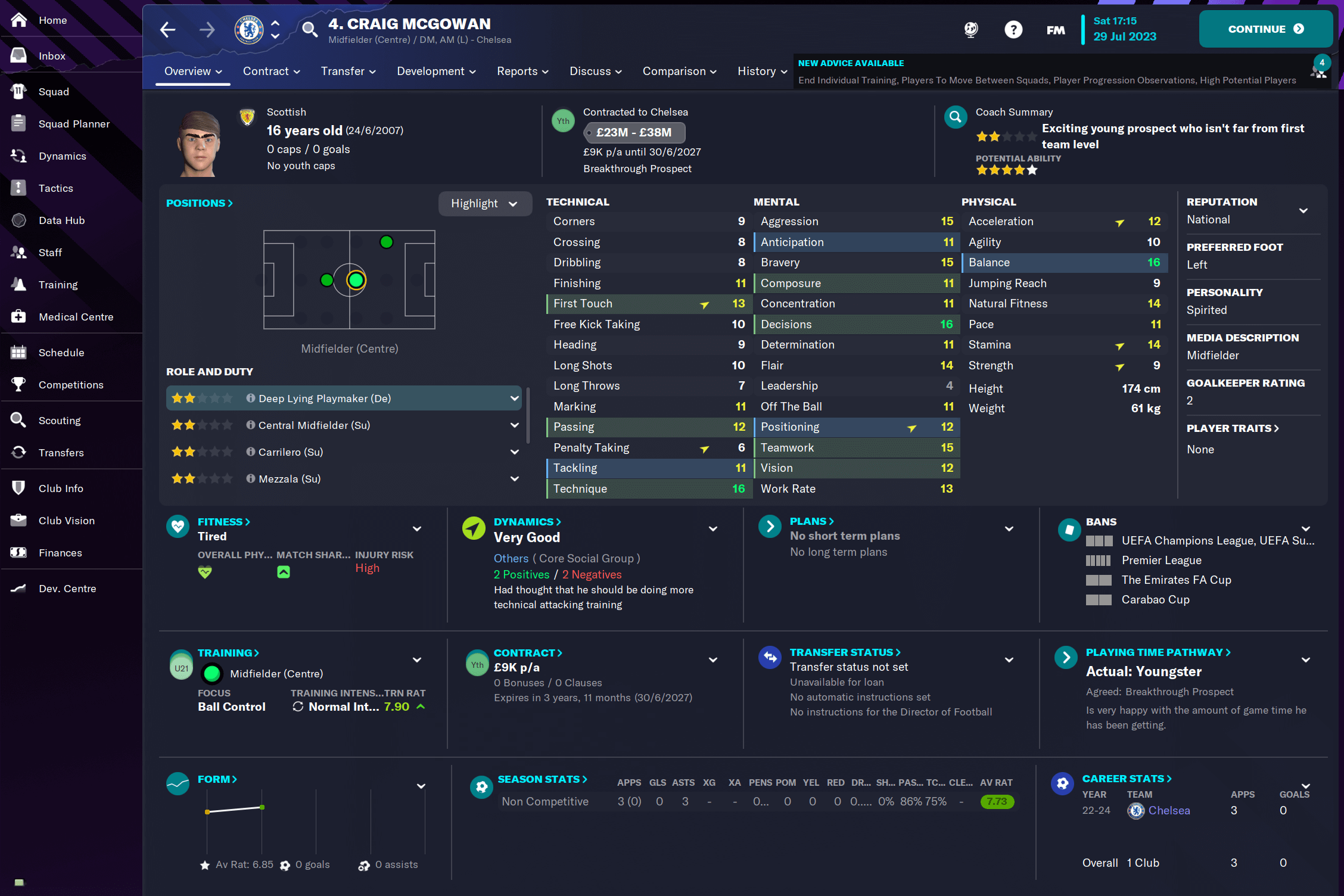 Cesare Casadei is back from Cardiff where he spent last season on loan. He gained some important experience, and now I want to keep him at the club, developing with us. Although our midfield is deep, he will certainly get chances. His quality is fantastic, and it is time for him to start being a part of the squad. 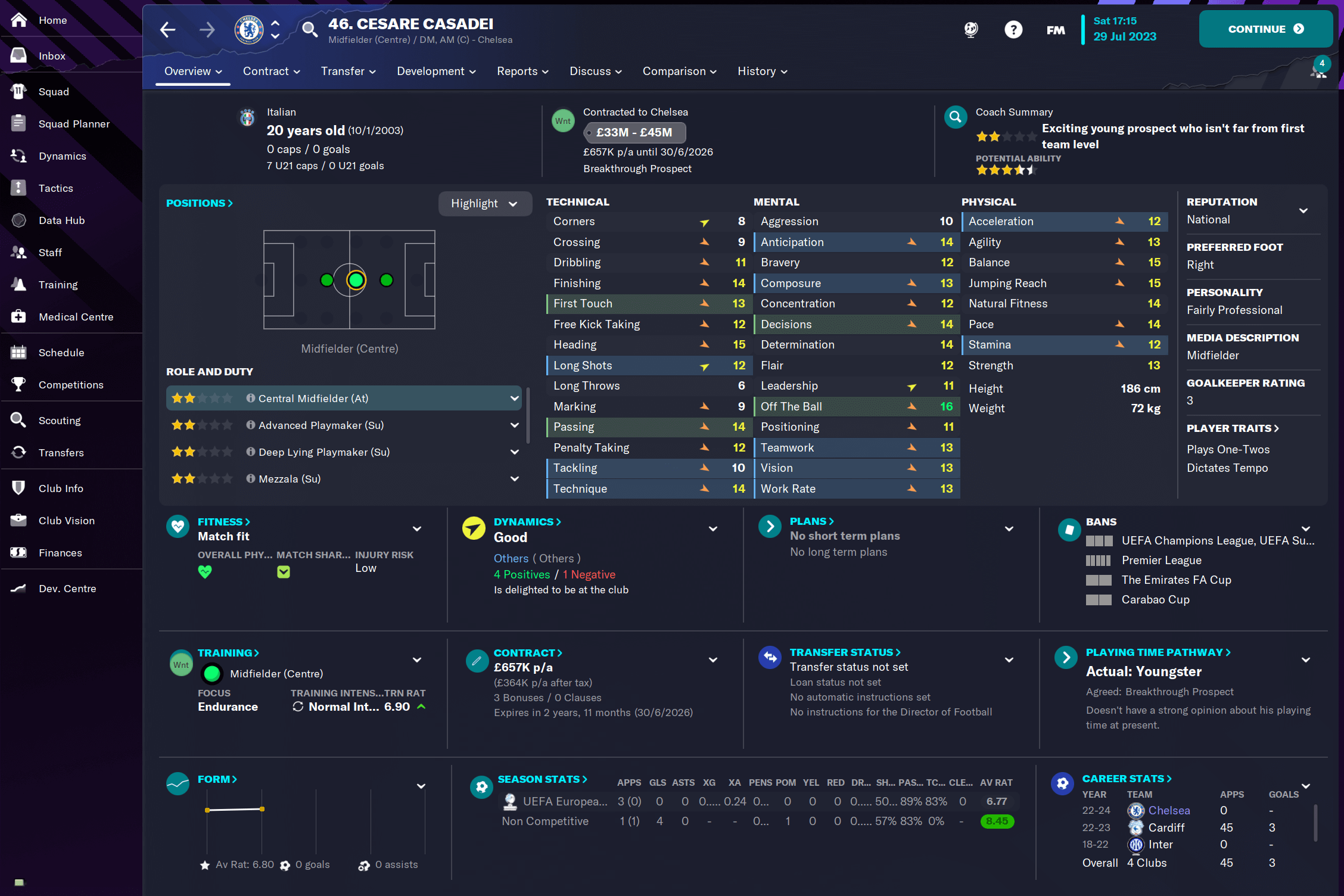 Finally, Harvey Vale is another player who caught my eye and will be staying with us. The 19-year-old will get occasional opportunities despite playing with the U21 for the majority of the season. He looks extremely good already, and his versatility has really caught my eye. 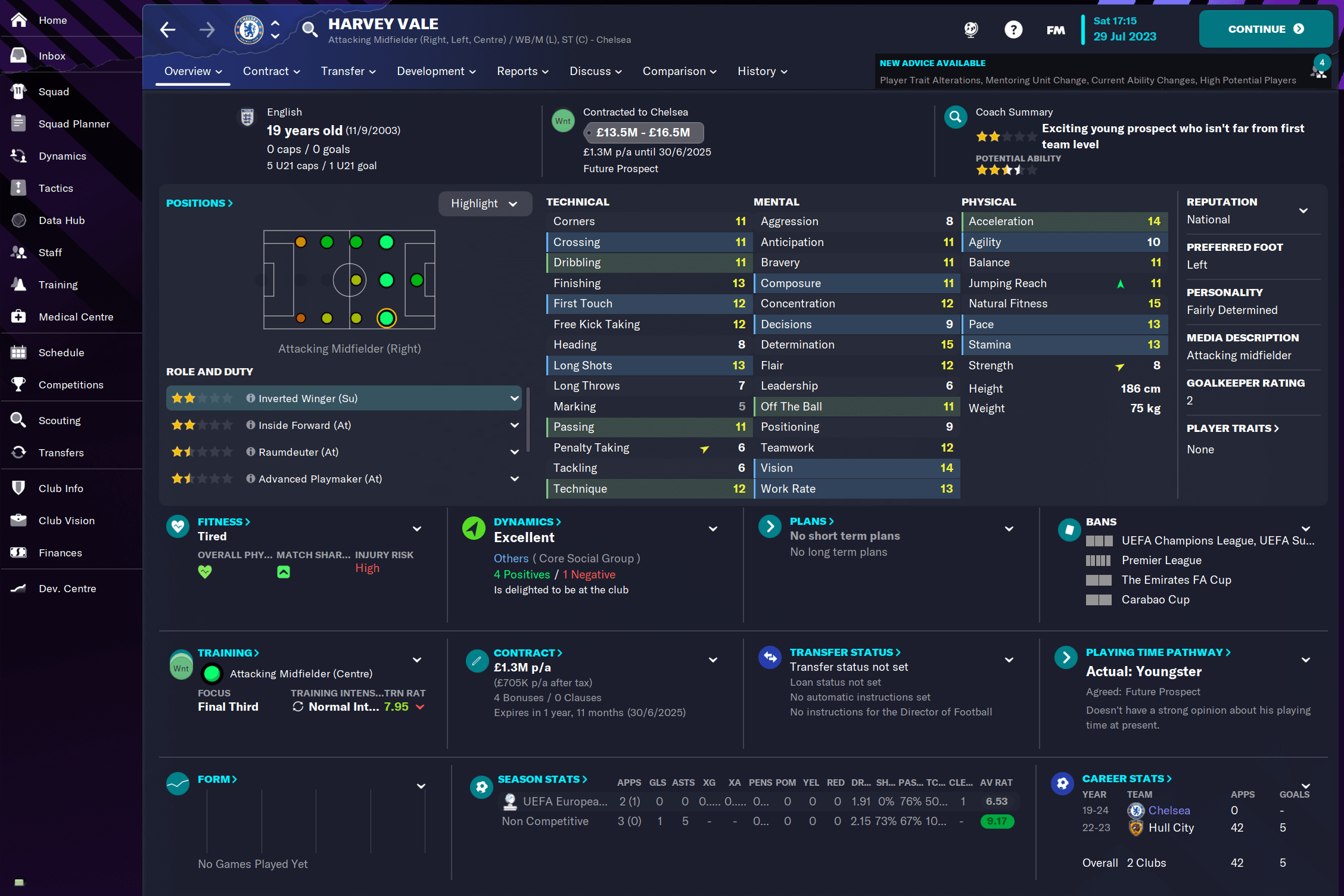 Things are more promising than ever at Stamford Bridge. After a solid first year, we have managed to assemble the perfect foundation to build on going forward. At any rate, we already have world-class quality in our hands, and it is time to challenge the elite.

Football Manager 2023: The best tactics for Chelsea in FM23