Chelsea are looking to strengthen their left-back position after being linked with a move for Brighton & Hove Albion’s Marc Cucurella. Ben Chilwell was the number one choice left-back for Chelsea, but he got injured towards the start of last season and was out for the rest of the season. Marcos Alonso was deputised in his place and created a lot of threats while attacking. However, the Spanish full-back is also set to leave the Bridge. Chelsea are now targeting players who could be an asset for the long run. Cucurella is just 23 years old and is an attacking full-back. He joined Brighton at the start of last season from Getafe and impressed everyone with his skills on the ball, thus making him one of the players on the wishlist of a lot of clubs.

Cucurella joined the club on the deadline day of the summer transfer window last season. He featured in all 35 matches for Brighton in the English Premier League. The player scored his first goal for the club against Manchester United and provided an assist against Chelsea. 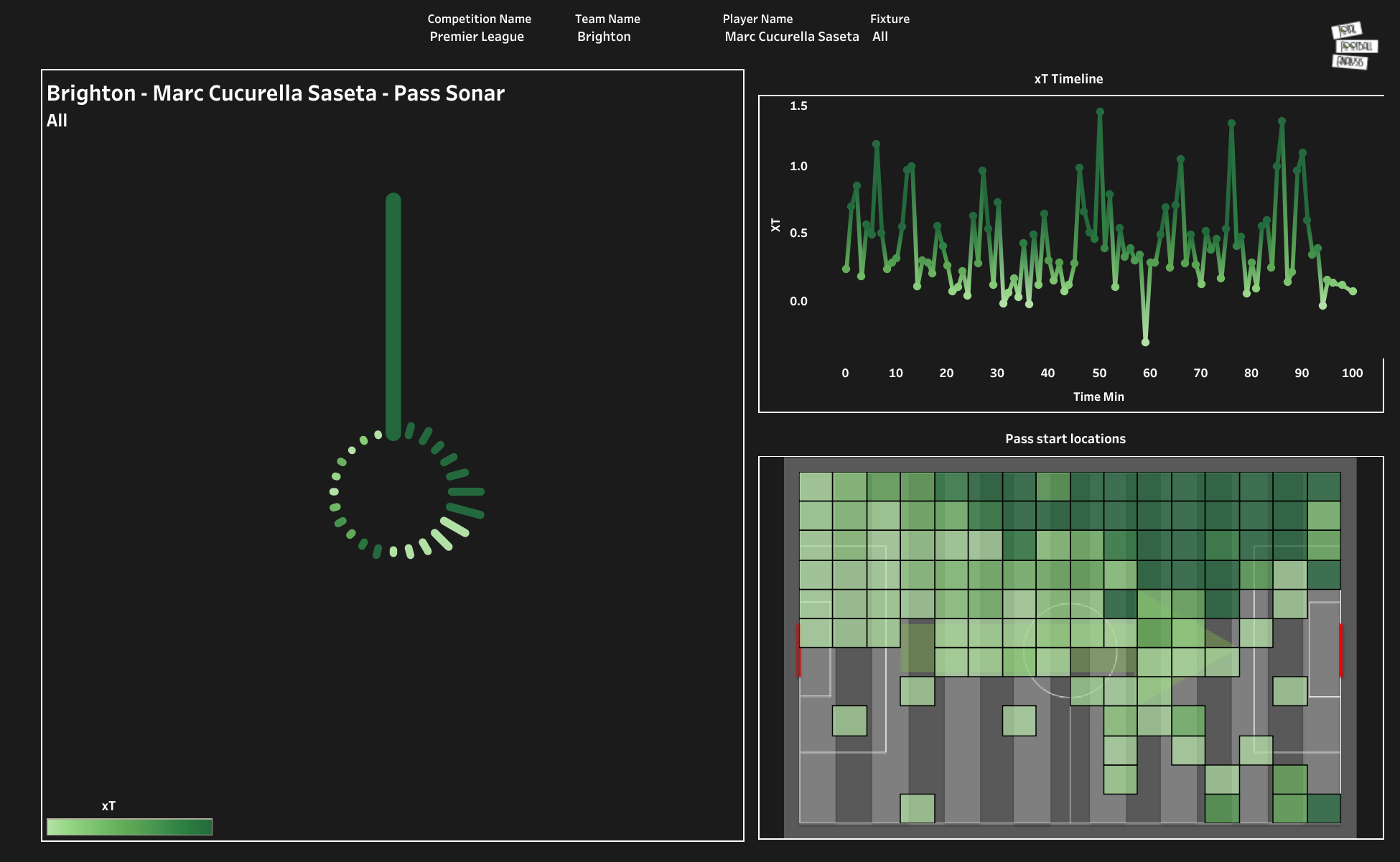 Cucurella featured as a left-back and left-wing-back for Brighton this season. The above viz shows the pass start location as well as the threat created from passes at different time intervals. The 23-year-old played a high attacking line and attempted a lot of passes from the wide sides. He also likes to drift towards the centre and attempt a few passes into the opposition’s penalty box. Cucurella averaged 1.93 dribbles per 90 minutes with a 66.67% success rate. He managed to dribble past the opposition defence and took 1.47 touches per 90 minutes inside the opposition’s penalty box. The xT timeline shows that the player created threats during different intervals of the match. He always carried threats with the ball at his feet. 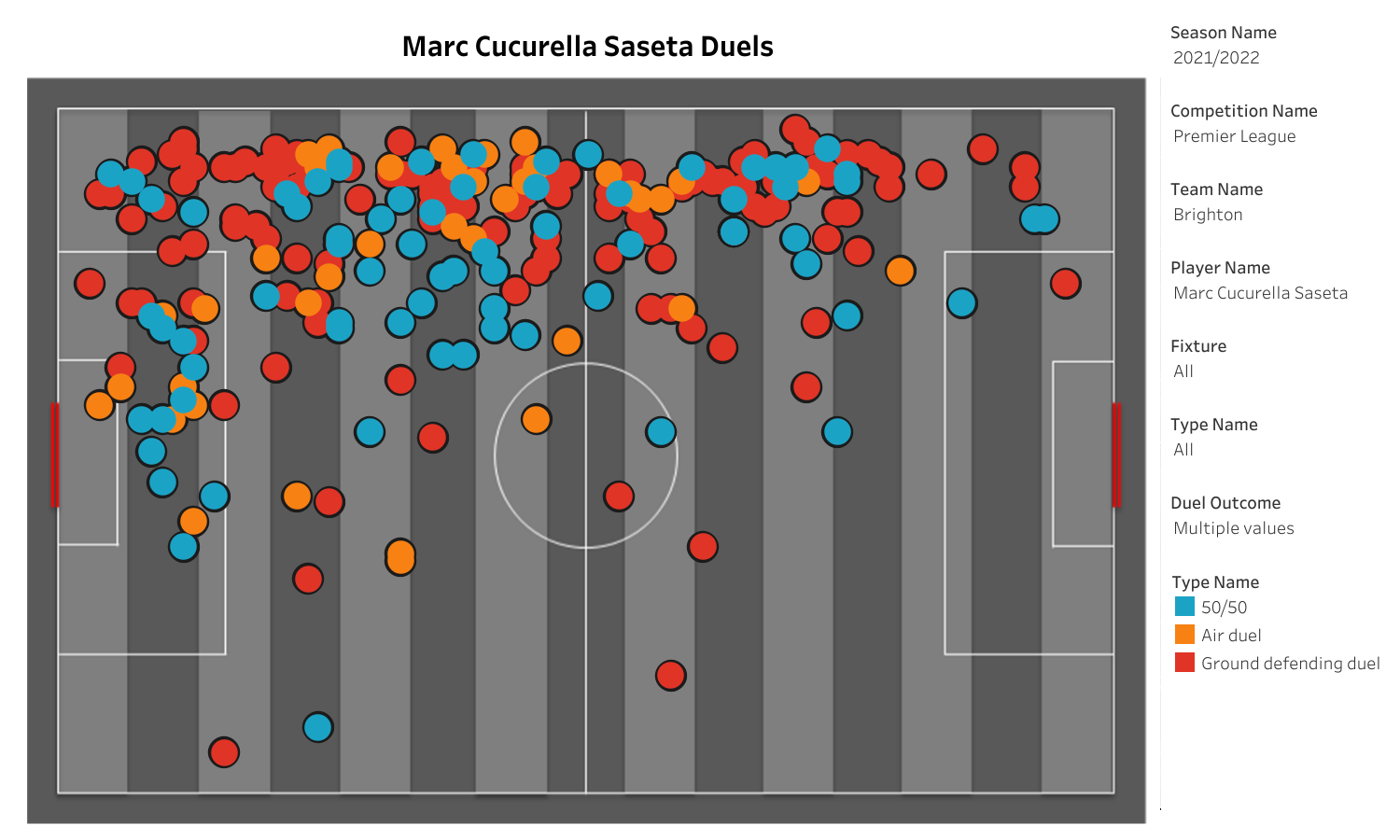 Cucurella also gave some defensive contributions that helped his side keep ten clean sheets. The above viz shows all the duels that were won by the player or the duels that ended in a neutral result. The left-back contested 7.79 defensive duels, 1.96 aerial duels and 3.2 loose ball duels per 90 minutes. He won 23.45% of defensive duels, 53.42% of aerial duels and 51.26% of loose ball duels. Cucurella won a few duels inside the opposition’s half and helped his side to keep the attacking momentum. 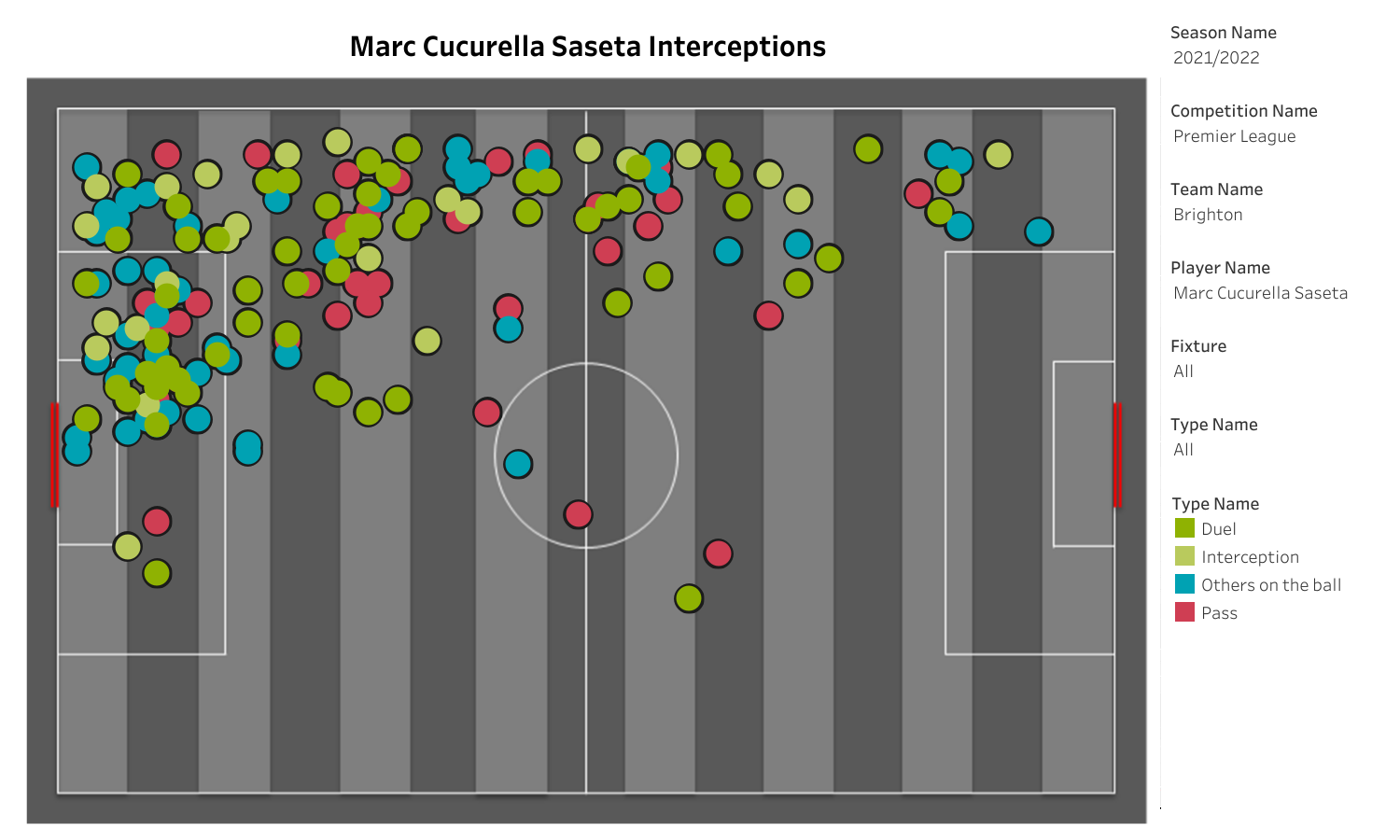 Cucurella can contribute both to the attacking and the defensive side. He likes to make forward runs and is always a threat towards the opposition goal. The player can also defend his team’s goal by winning duels and making crucial interceptions. Chelsea will battle with other clubs to acquire the signing of the Spanish full-back. He could easily challenge Ben Chilwell for the left-back position.