Chelsea will look for back-to-back wins when they host Leicester City in the English Premier League. The Blues lost the FA Cup final against Liverpool the previous weekend and will go trophyless this season. However, they have qualified for the UEFA Champions League and will focus more on next season. Leicester City, on the other hand, registered back-to-back wins and will be high on confidence. Chelsea were the superior team the last time these two teams met in the league, scoring three goals while conceding none.

The home team won their 20th game of the season after beating Leeds United in the previous round by a scoreline of 3-0. The Blues have drawn ten matches and lost six. Thomas Tuchel’s men have scored the third-highest number of goals in the league. They have scored past the opposition keeper 73 times, with an xG rate of 64.50. In return, they have conceded 31 goals with an xGA rate of 33.56. 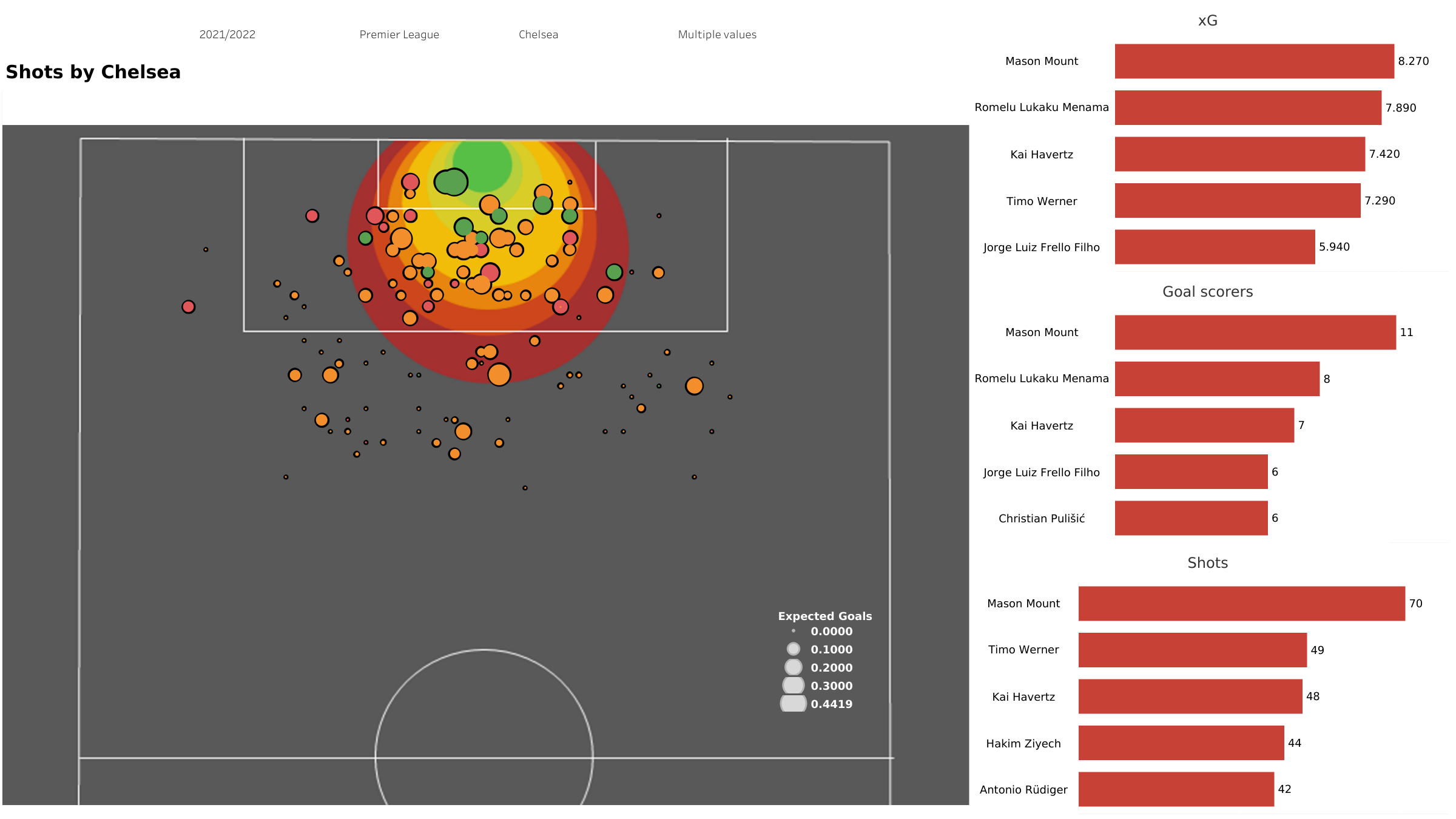 Chelsea have attempted 525 shots with an average of 13.4 shots per 90 minutes. They have managed to hit the target 193 times. A total of 327 shots have been attempted from inside the opposition’s penalty box, with 143 of them being on target. The Blues have been the third-best team for attempting shots this season. The above viz shows all the shots attempted by the Blues from set-pieces except the penalty spot. The Blues have managed to score a few goals from headers, and their defenders are a threat in the air. Antonio Rudiger has attempted 42 shots, most of them while going forward during set-pieces.

Thomas Tuchel has a few injury concerns as Timo Werner, Mateo Kovacic and Kai Havertz are all suffering from injuries. Andreas Christensen is also expected to miss the match. Ben Chilwell and Callum Hudson-Odoi are out for the rest of the season. N’Golo Kante, Cesar Azpilicueta and Hakim Ziyech will be expected to start this match.

After a disappointing start, Leicester City are ending the season strongly. This season, they have won 13, drawn nine, and lost 14 games. Brendan Rodgers’ side has scored and conceded 57 goals. They have the second-worst xGA rate of 70.48 and an xG rate of 47.67. 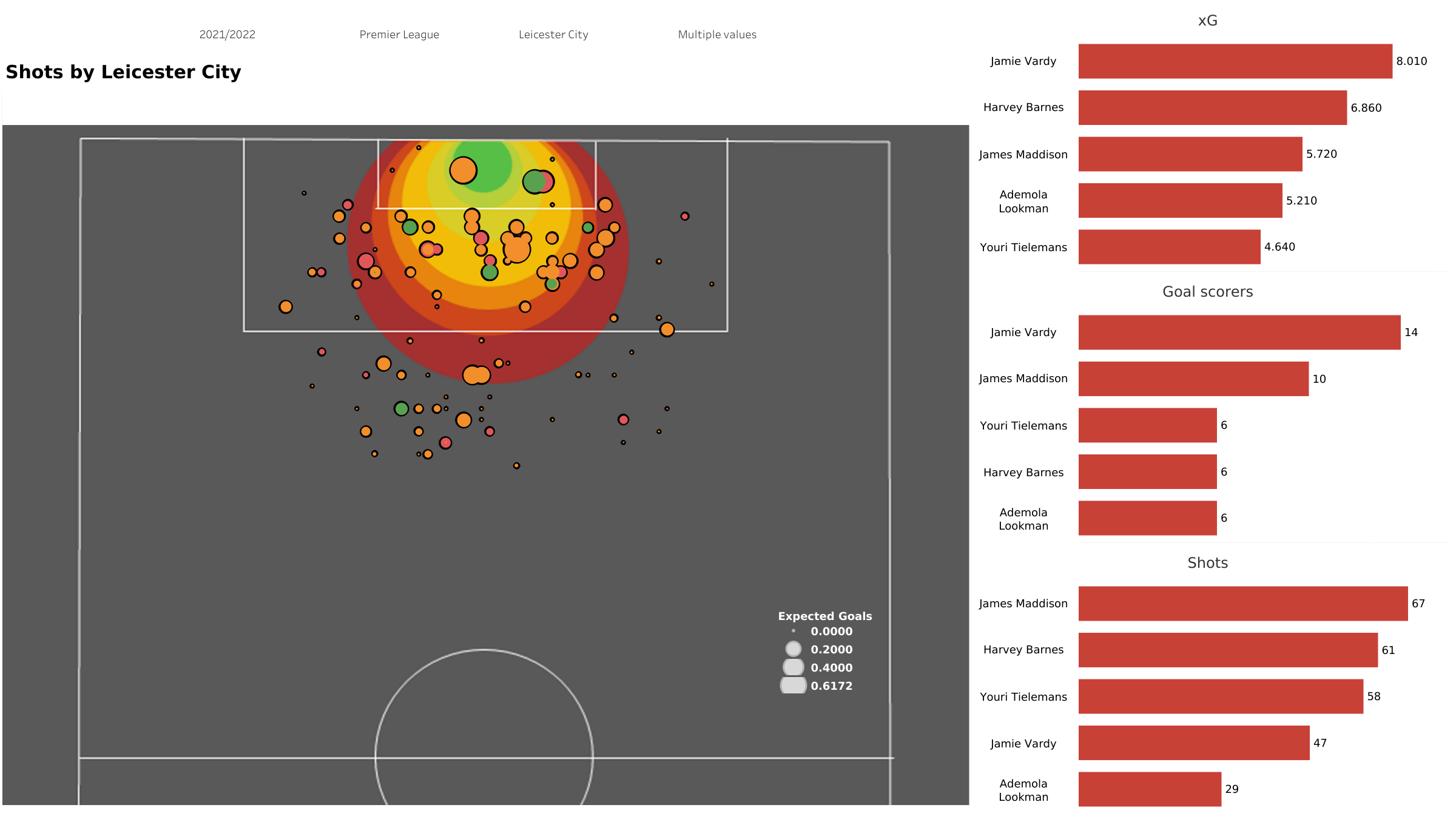 Leicester City players have attempted 408 shots, and 153 of them have been successful. They have an average of 10.5 shots per 90 minutes and 3.93 shots on target. The Foxes have attempted 240 shots from within the opposition’s penalty box, 105 of which have been successful. Jamie Vardy and James Maddison both scored goals in their previous encounter, making them the team’s top scorers. From the above viz, we can observe that the Foxes have failed to trouble the opposition defence during set-pieces. They have attempted a few shots and would find it difficult against an experienced Chelsea defence.

Kasper Schmeichel was rested for the previous match and is expected to return to the starting XI. Nampalys Mendy, Wilfred Ndidi, Ryan Bertrand, Ricardo Pereira and Hamza Choudhury will miss this match. Marc Albrighton and Ademola Lookman will be expecting to start this match.

Chelsea will have the home advantage when they take on the Foxes in their second-last fixture of the season. The Blues will look to keep aside their FA Cup loss and focus on ending the league in the third position. Leicester City, on the other hand, have nothing to play for and will look to take advantage of Chelsea’s loss in the FA Cup final.