Chelsea will host Tottenham Hotspur at Stamford Bridge in the English Premier League. Both the London-based clubs are strong contenders to finish in the top four positions this season. Chelsea began their season with a 1-0 victory over Everton at Goodison Park. Tottenham Hotspur had a slightly better start as they demolished Southampton 4-1 at home.

Chelsea started their season in their regular 3-4-3 formation. Kalidou Koulibaly was introduced in the defence, and Raheem Sterling started as the number nine for Thomas Tuchel. The Blues had 60.16% ball possession and were the better team on the day.

Tottenham Hotspur played their first match in a 3-4-2-1 formation. They went behind early in the match, but continuous attacks on Southampton’s goal ended the match in favour of the Spurs. They were also dominant in the game.

Let us now look at three things on the cards according to stats obtained from the first matches of these two London clubs.

The battle on the wings

The match will witness both teams attack from the wings. These two teams play with a three-at-the-back formation, and that allows the full-backs to operate in the wing-back role. Chelsea and Spurs have attacking wing-backs in their teams, and the other forward players are also capable of playing on the wide sides. 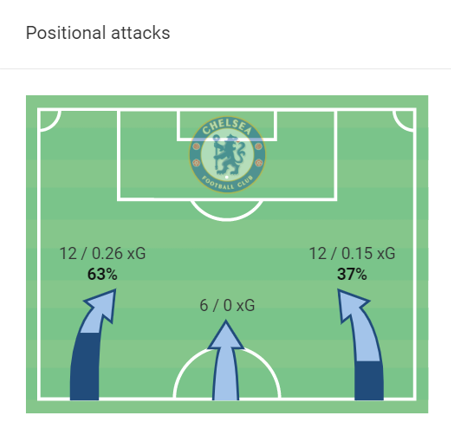 Chelsea created 30 positional attacks in the last match. The above viz shows that 24 attacks were created from the wings. 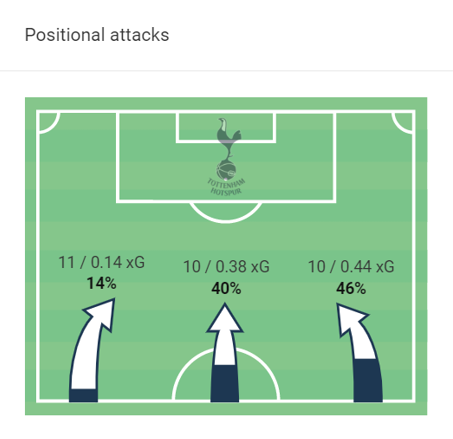 The battle on the wings means that both teams will attempt crosses and passes into the opposition’s penalty box. Both teams have players who can score headed goals. Chelsea attempted 13 crosses in the last match, and six were successfully delivered. Spurs attempted 22 crosses and had nine successful attempts. This game could also experience a lot of crossing, and that might lead to aerial battles. 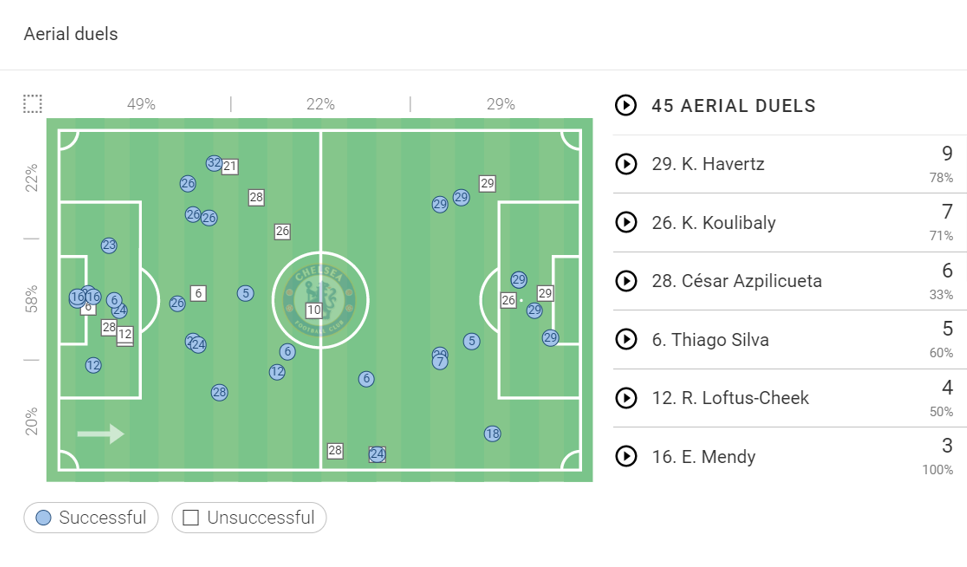 In the last match, Chelsea players contested 45 aerial duels and won 31. By looking at the above viz, it can be observed that Kai Havertz won three duels inside the opposition’s penalty box, and he could be a threat to Spurs. The Blues have also won a few duels inside their penalty box. 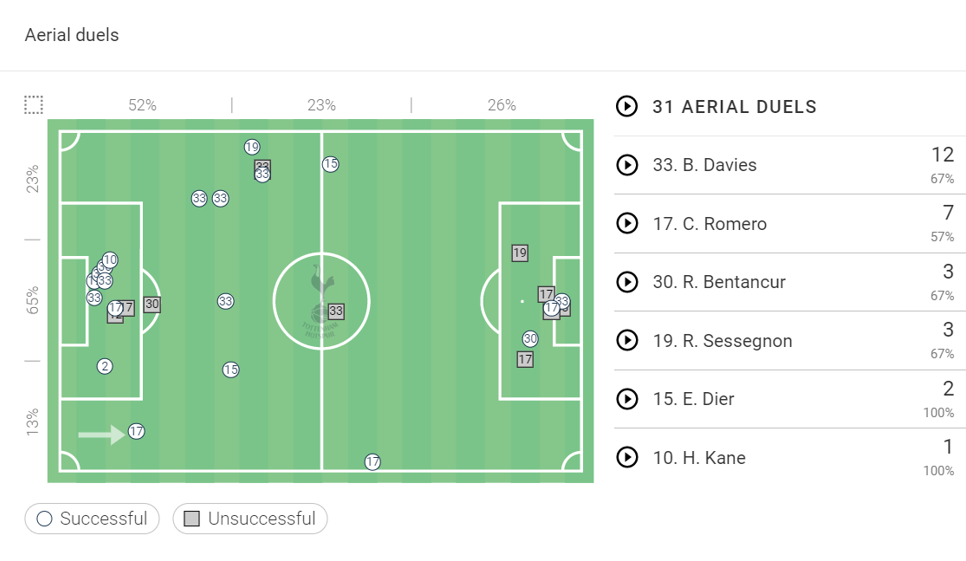 However, it won’t be easy for Chelsea to break down Spurs’ defence. They contested 31 aerial duels and won 21. Antonio Conte’s defenders were strong in winning the ball inside their penalty box. Both teams will try to beat each other in the air in crucial areas to create some opportunities to score goals.

Shooting on the money

Both goalkeepers are set to have a busy day due to the attacking threat posed by these two teams. They were very accurate in their shooting in their previous games.

Chelsea attempted 13 shots in the match and ended the match with an xG rate of 1.79. The Blues hit the target six times. They attempted more shots on the weak side of Jordan Pickford. Tottenham Hotspur’s goalkeeper, Hugo Lloris, is also strong on the left side. Chelsea might go with the same tactics in this game.

Tottenham Hotspur attempted 15 shots in the match, and seven were on target. They had an xG rate of 1.87 at the end of the match. The above viz shows that Spurs players placed the shot on either side of the keeper and were able to find the back of the net three times. They will test Mendy in Chelsea’s goal.

Thomas Tuchel might hand summer signing, Marc Cucurella, his first start in a Chelsea shirt. This is the only change expected in the team.

Antonio Conte is likely to go with the same starting XI. Richarlison is also expected to get his first minutes on the pitch in a Tottenham Hotspur shirt. He will be representing his third club in the English Premier League.

This London Derby will be the first meeting between the teams that finished in the top-four positions last season. This contest promises to bring a lot of entertainment. Chelsea have the home advantage, but it won’t be easy to get three points from Antonio Conte’s side. Both teams cannot afford to drop points so early in the season.