Chelsea travel to Southampton in the English Premier League with the goal of climbing the league table. The Blues won their second match of the season this weekend and will be high on confidence going into this match. The Saints, on the other hand, suffered their second defeat of the season and will look to take at least one point from this game.

Southampton suffered a 0-1 loss against Manchester United in their previous game. The Saints created more chances than their opponents but failed to convert any of them. Southampton have collected four points in four games. They have scored five goals with an average xG rate of 1.25. In return, they have conceded eight goals with an average xGA rate of 1.54. They have failed to keep a clean sheet in any match.

Chelsea returned to winning ways after a 2-1 victory with ten men over Leicester City. Raheem Sterling opened his Chelsea account and scored a brace to help his side achieve a win. Tuchel’s men have scored five goals with an average xG rate of 1.46 and conceded six goals with an xGA rate of 1.93. Their defence is starting to settle but there are still some weaknesses left by Antonio Rüdiger’s departure.

Let us look at some of the stats that will show how these teams have played this season. 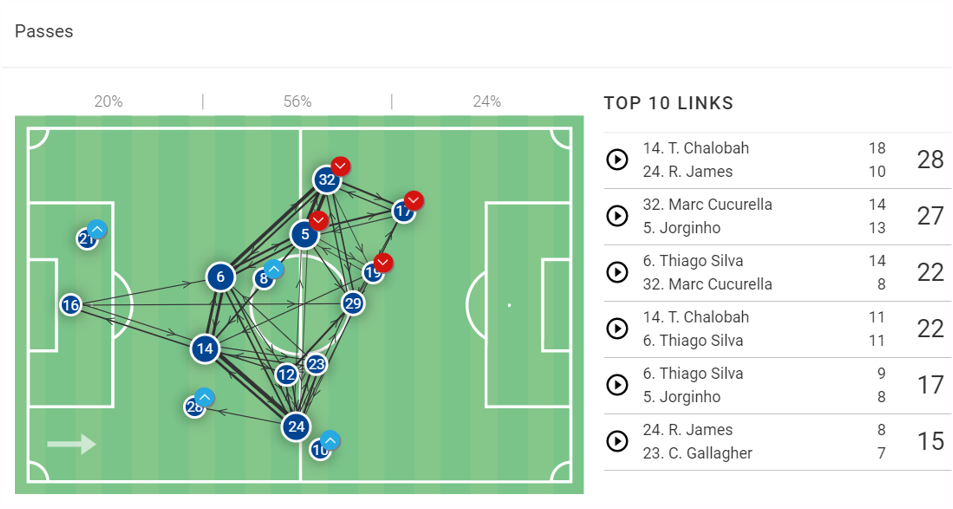 Chelsea operate with two wing-backs, and most of their attacks come from the flanks. They average 34.25 positional attacks per match and average seven shots from these attacks. The above viz shows the passing links from the last match. It can be observed that the average position of most of these players was on the left side. They were playing with ten men and decided to attack from one side of the pitch. The full-backs play a high line, and the midfielders give them defensive cover. The front three of Raheem Sterling, Kai Havertz, and Mason Mount play a lot closer to each other. The Blues average 12 shots per match with three on target. They will once again look to exploit the Saints’ defence from the flanks. 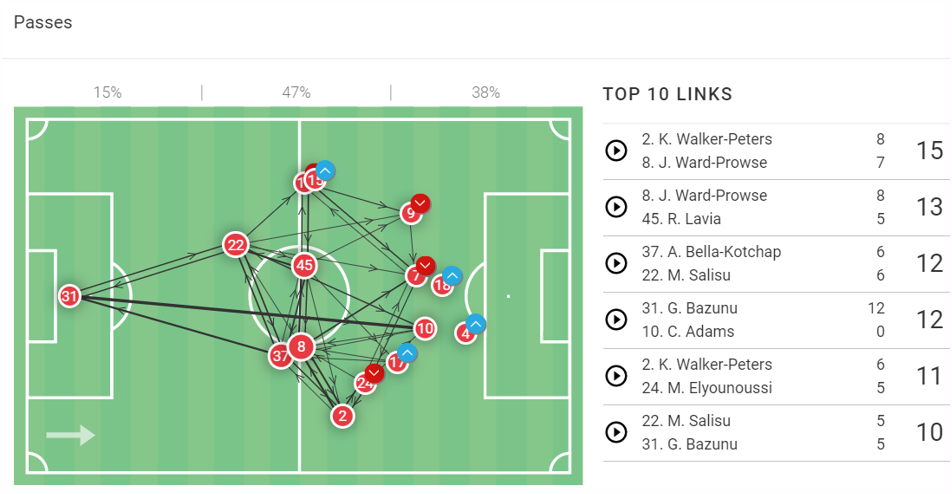 Southampton have made a lot of changes to their attacking approach this season. They have played with a back three and a back four according to the match conditions. They average 29.75 positional attacks and 11.75 shots per match, with a 32% shot accuracy rate. In the last match, Southampton played in a 4-2-3-1 formation. The above viz shows that Adam Armstong played on the left but operated as a secondary striker. Joe Aribo’s average position was also just behind the striker, and Mohamed Elyounoussi played more in the midfield on the right side. They might change the strategy as Chelsea will have more players in the centre of the defence.

This match could turn out to be an aerial battle, with both teams capable of winning aerial duels in crucial areas. 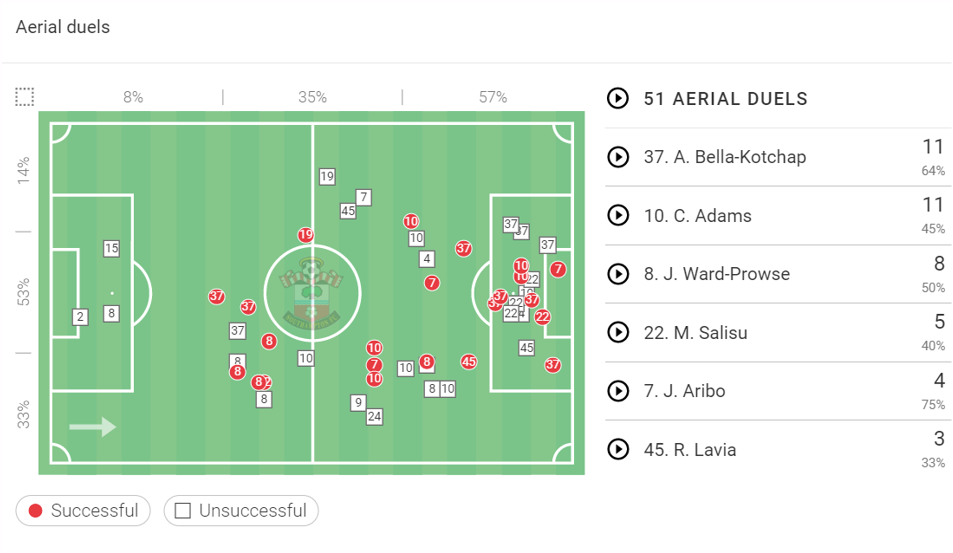 Southampton players attacked by delivering a lot of crosses in the last game. They attempted 22 crosses and successfully found ten teammates inside the opposition’s penalty box. The above viz shows that they failed to win most of their aerial battles inside the box, but they only needed one opportunity to score a goal. They won’t let it go this time. Overall, the team averages 44 aerial duels with a 41.5% success rate. 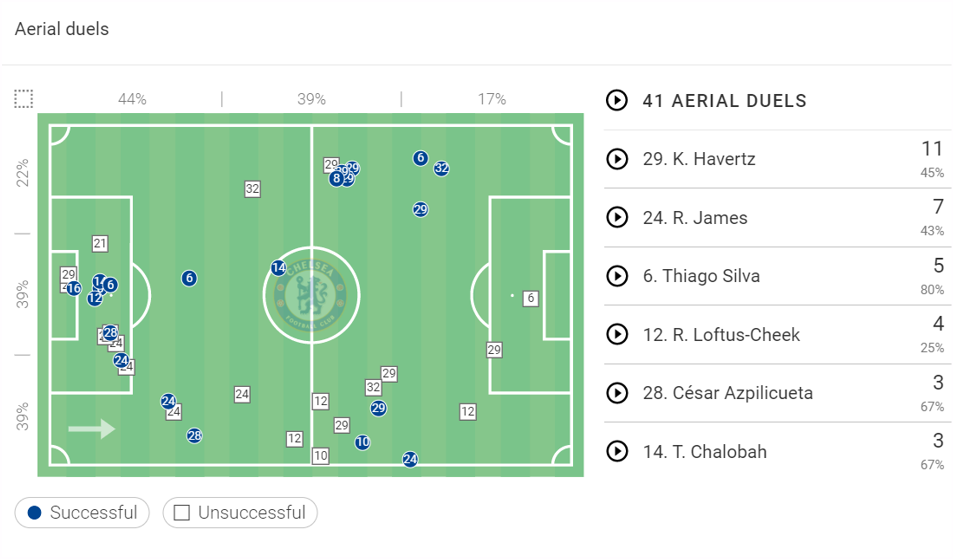 Chelsea players can also create a lot of trouble in the air. In the last match, they were defending with ten men and cleared a lot of aerial passes that were delivered into the penalty box. It won’t be easy for the Saints to beat such an experienced defence. They average 41.5 aerial duels this season and have a 54% success rate. Other than this, Kai Havertz is also a threat in the air. Chelsea wing-backs will try to find him inside the penalty box to score goals.

The home team have no injury concerns, and the manager could line up the same players who played against Manchester United.

Chelsea will be without Conor Gallager, who will be serving his one-match suspension. There is a big positive as Kalidou Koulibaly will return to the starting XI after serving his suspension. Thomas Tuchel might shift to a back three, and Ruben Loftus-Cheek is likely to play in the midfield.

Chelsea will be the favourites to win this match after making a comeback with ten men on the pitch. They cannot afford to lose more points at the start of the season. The Blues are eyeing silverware under the new ownership, and the team is starting to build momentum going further into the league. Southampton, on the other hand, will once again look to take advantage of the home conditions, but it won’t be an easy job for Ralph Hasenhüttl’s men.