Christian Pulisic scored an equalizer towards the end of the first half against Liverpool and helped Chelsea earn a draw in the English Premier League. The US international player has started in the last three games for Chelsea and has made 11 appearances for his side this season. The Blues have a lot of attacking options upfront, and the manager has used him in different positions. 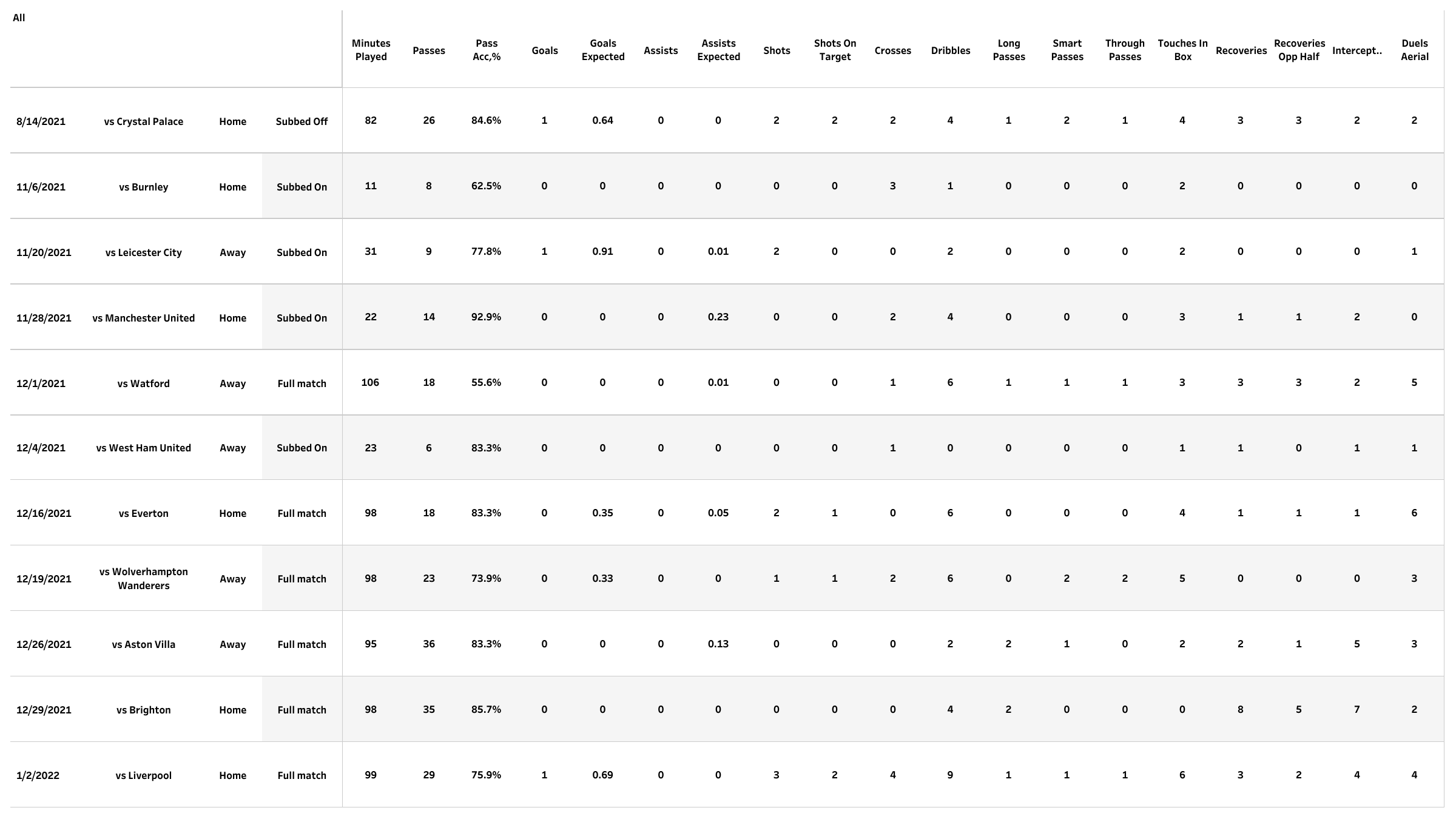 Christian Pulisic has featured in 11 matches and started in seven. He missed some of the matches due to injuries. He has managed to score three goals with an xG rate of 2.92. The 23-year-old has attempted ten shots with a 60% shot accuracy rate. The above viz shows that he attempts a lot of dribbles and has taken a lot of touches inside the opposition’s penalty box. He has attempted 44 dribbles and taken 32 touches inside the opposition’s penalty box. 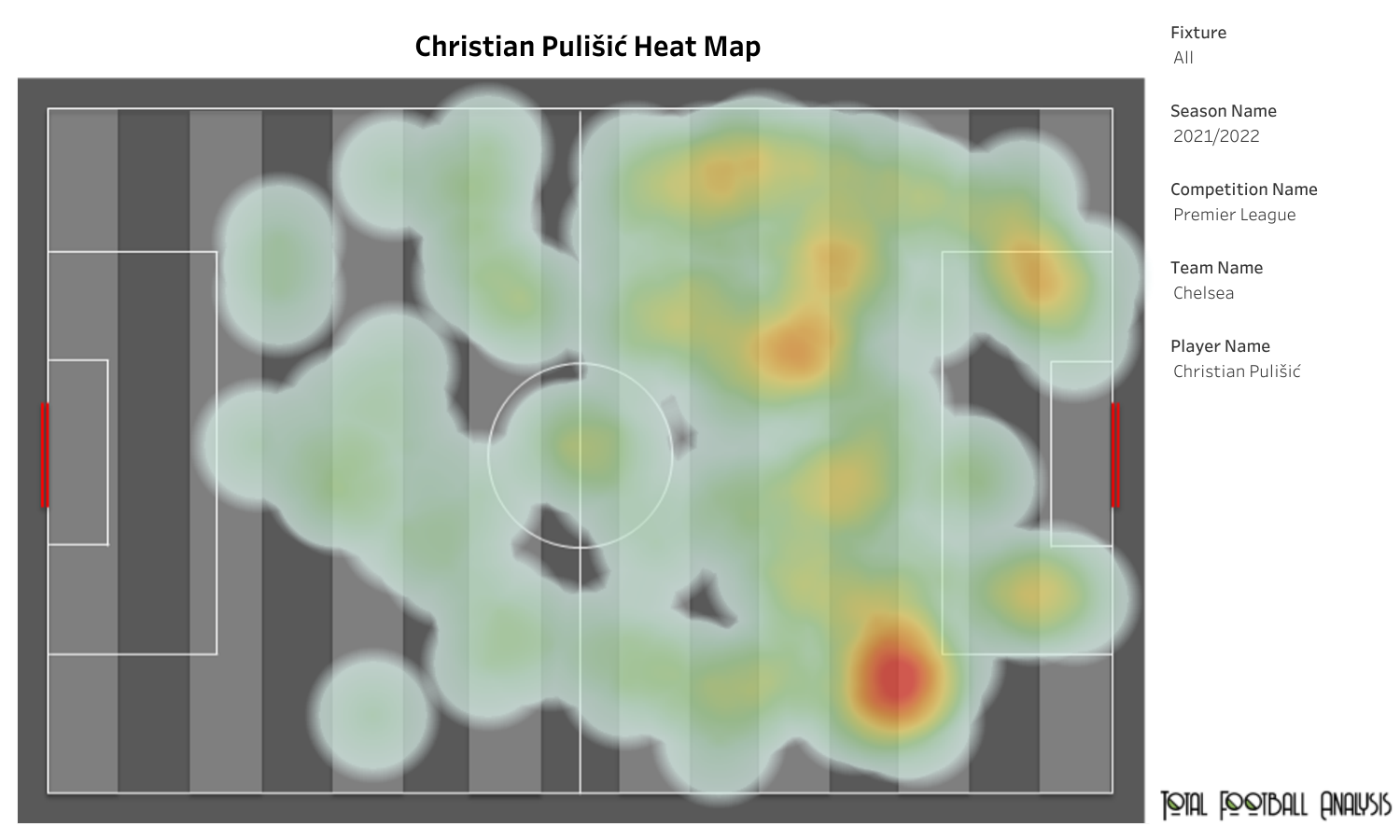 Chelsea usually play in a 3-4-2-1 formation, and Tuchel prefers to play two attacking midfielders behind the striker. The above viz shows the heatmap of Pulisic in the last three matches played. Pulisic featured as a number nine against Aston Villa, as a right-wing back against Brighton, and behind the striker against Liverpool in the last match. His heatmap shows that Pulisic has played in every part of the field. He plays in a flexible position, and tries to get inside the box from wider positions. 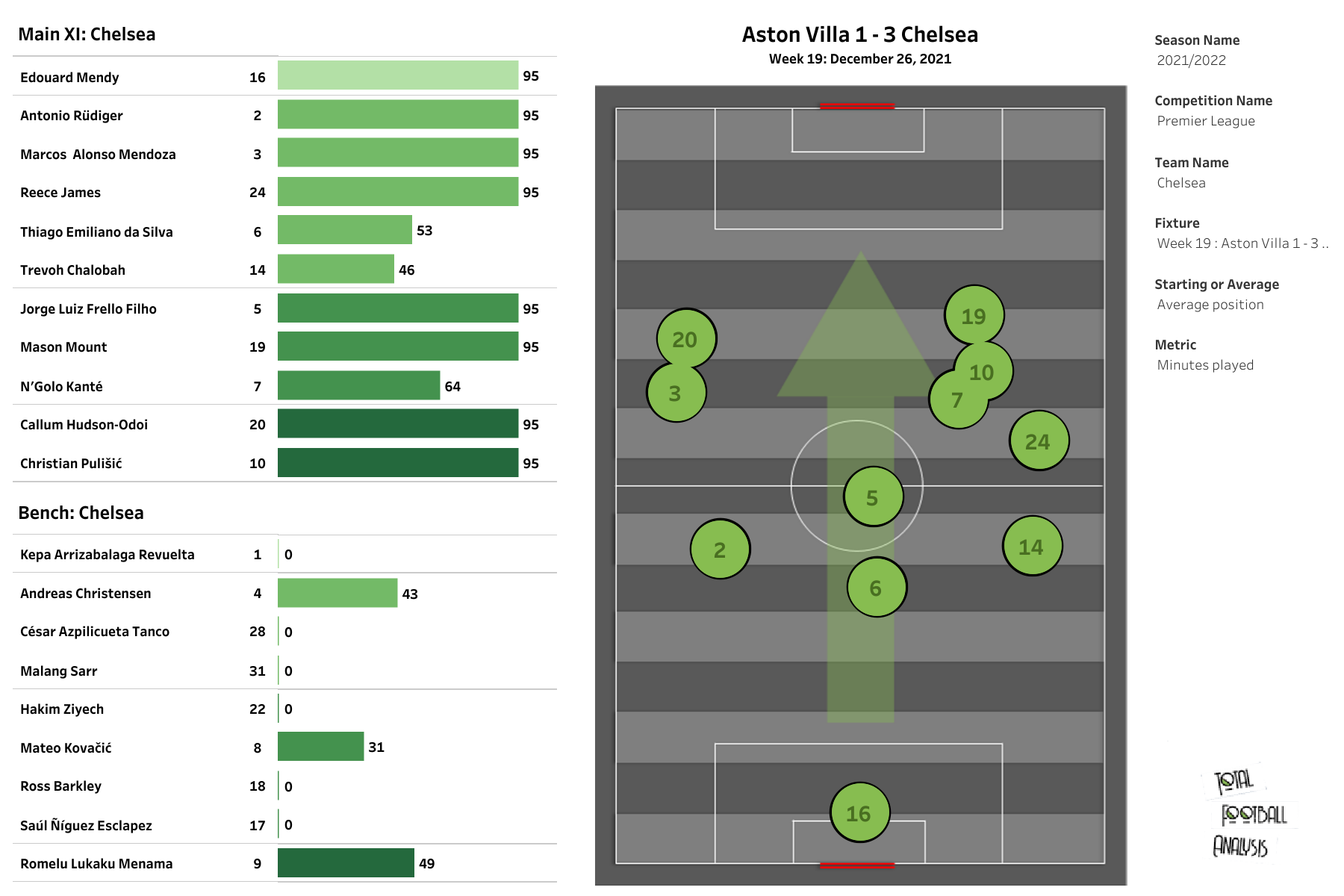 Against Aston Villa, Christian Pulisic featured as the number nine, and the average position in the above viz shows that he drifted more towards the right side. He was ineffective against Villa and didn’t attempt a single shot. Pulisic took two touches inside the opposition’s penalty box and made two recoveries. 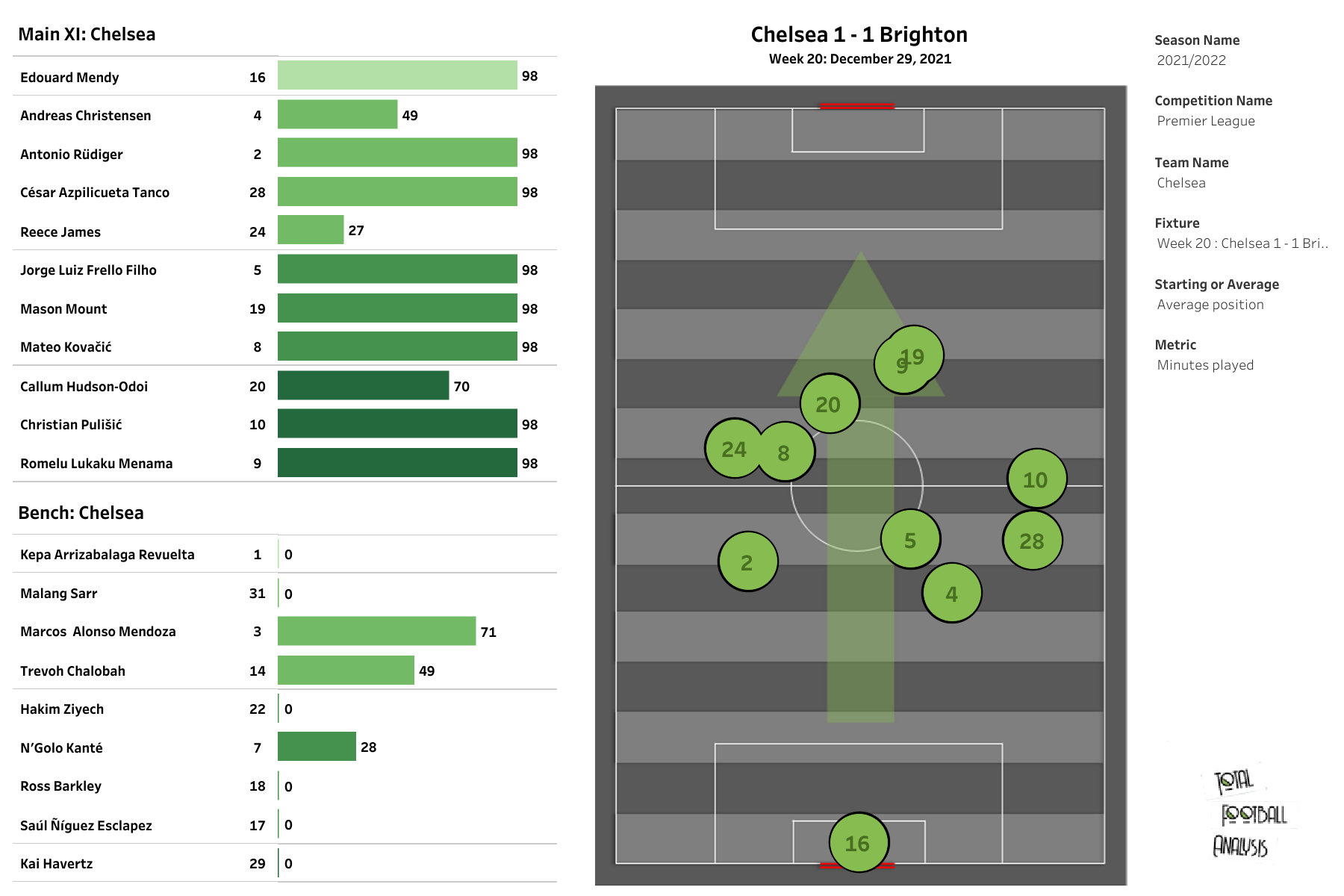 Against Brighton, Pulisic featured in the right wing-back position. In this match, his attacking contributions were less, and didn’t create many threats going forward. He made eight recoveries in the match, and five recoveries were made inside the opposition’s half. He also made seven interceptions. 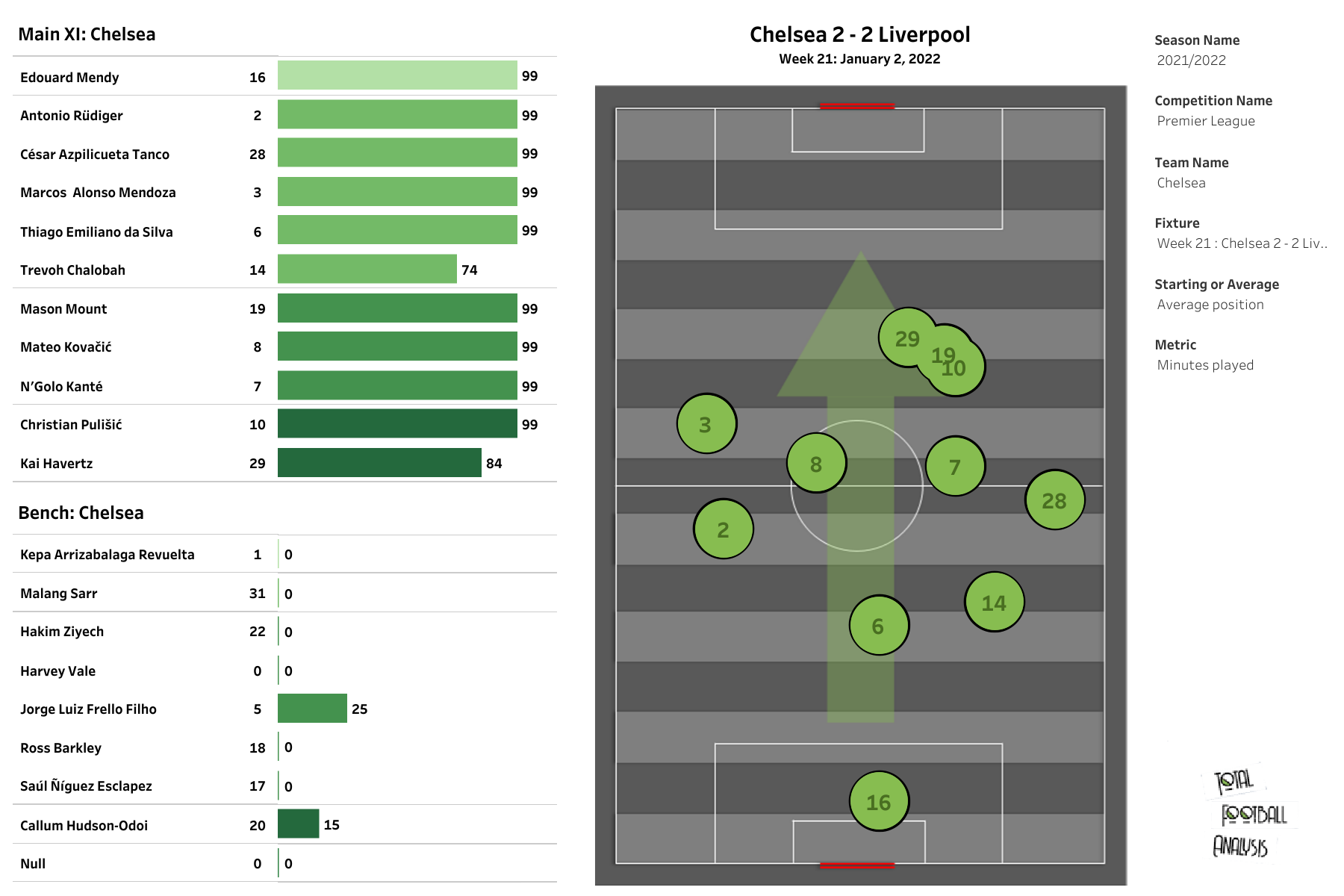 In the match against Liverpool, he played behind Kai Havertz. His average position was once again towards the left side of the pitch. He attempted three shots and managed to hit the target two times. He even attempted nine dribbles and took six touches inside the opposition’s penalty box.

The above viz shows that Pulisic has been impressive when he plays behind the striker. He is usually given a free role by the manager, and features in every part of the field. Thomas Tuchel has a lot of attacking options, and he rotates the squad whenever there is an availability of the players. There are chances that he might feature in the fourth consecutive match in a row.