Josko Gvardiol was one of the players who was on the wishlist of a few clubs in the summer. The 20-year-old Croatian is one of the highly rated defenders in the Bundesliga. He started the 2022/23 season well and now has once again gained the interest of many clubs. Chelsea is one of the clubs that are behind the young defender. The Blues have spent a lot of money on defenders in the recent transfer window. They are once again ready to splash the cash on another defender. We look at some of the stats of the player that show why Chelsea are once again ready to spend money on another defender. 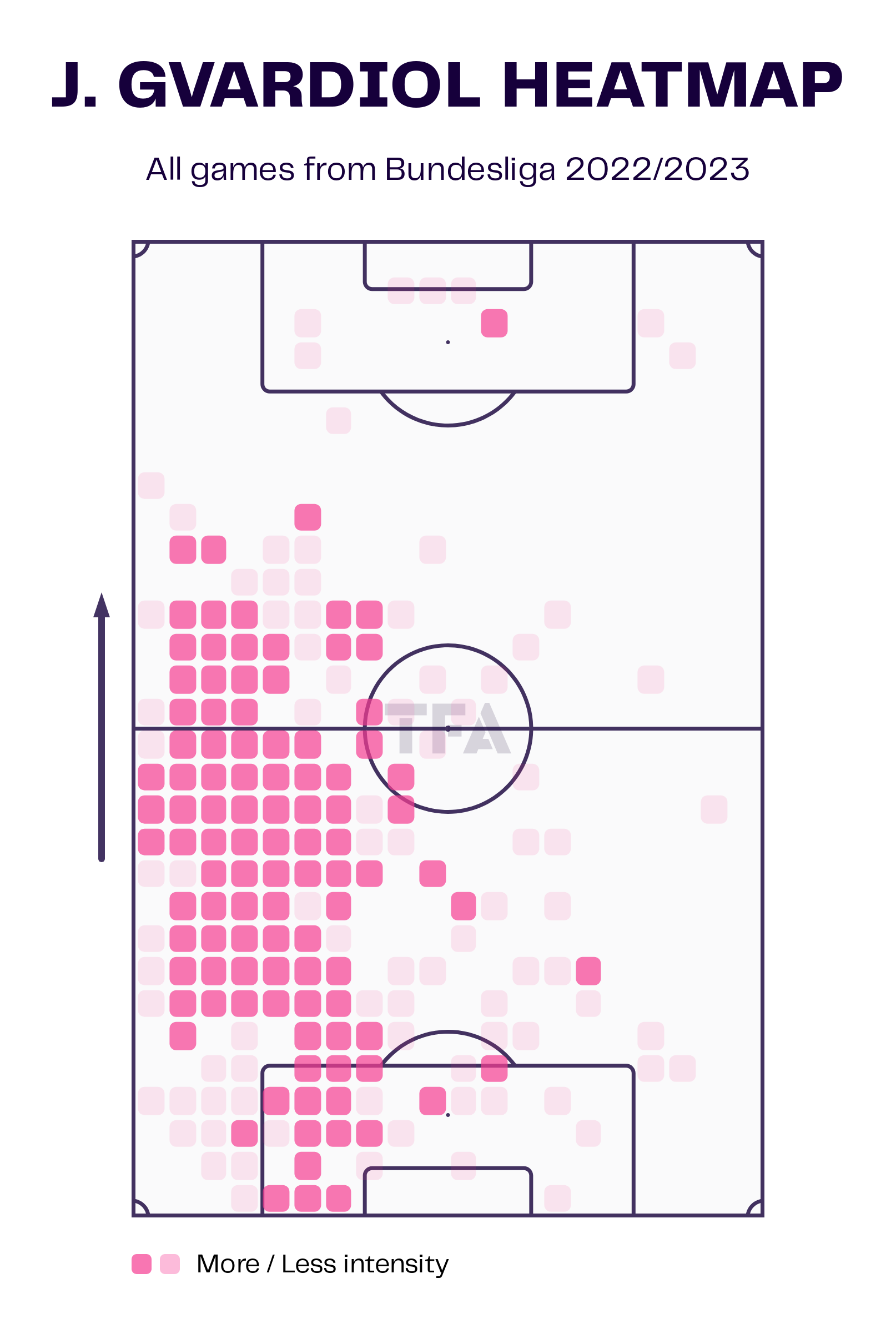 Josko Gvardiol plays on the left side of the defence. RB Leipzig plays in a three-at-the-back formation in most of the games, and this is the reason why Gvardiol’s heatmap shows more intensity on the left side. He made seven appearances for the club in the Bundesliga. This season, the 20-year-old has only started in three games. Last season, Gvardiol was offered more gametime as he made 35 appearances in the Bundesliga and UEFA Champions League combined and started in 31 matches. 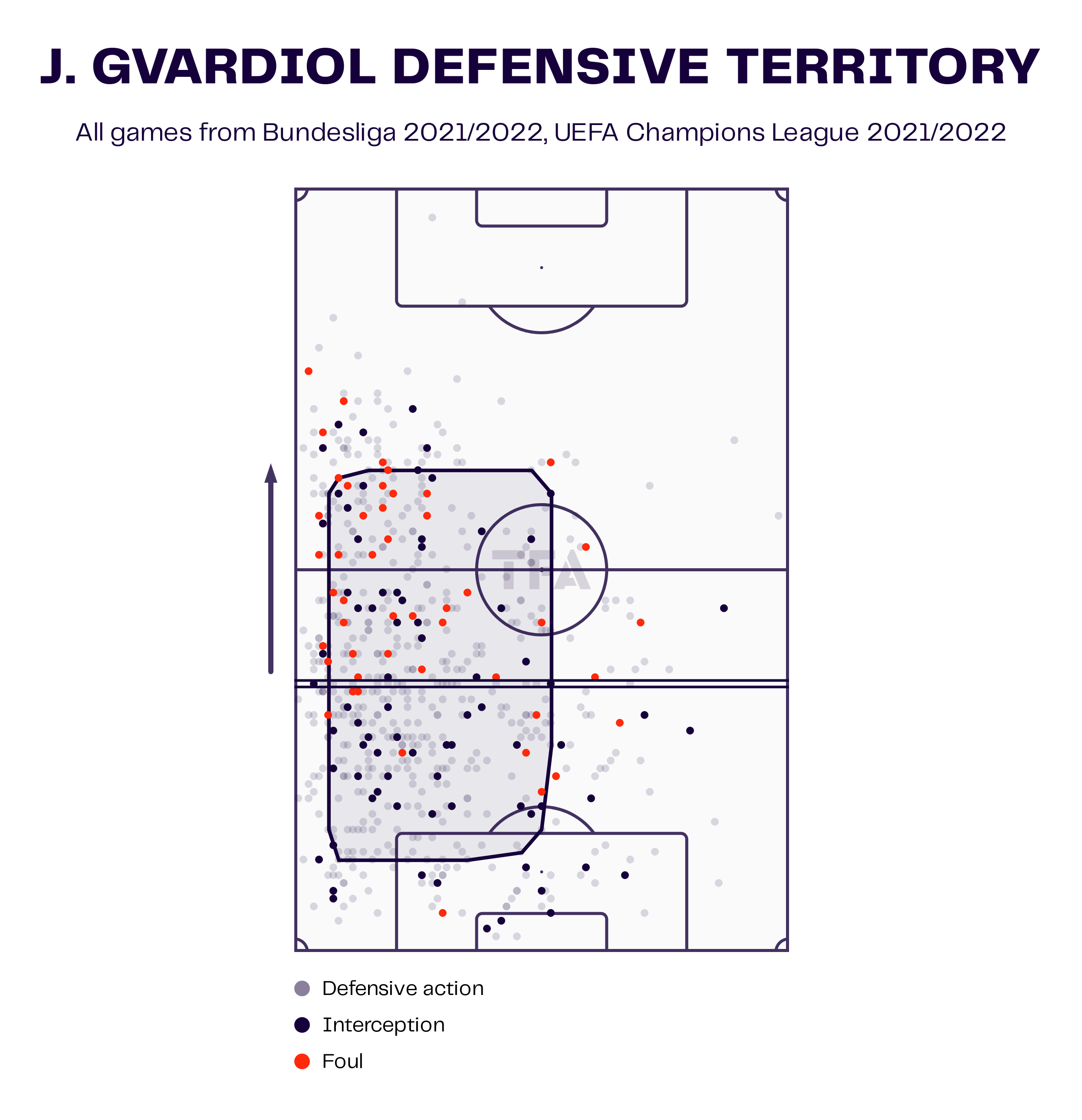 Josko Gvardiol covers a large portion of the left side. He has a 59.6% success rate and averages 14.13 duels per 90 minutes. Gvardiol has won 62.5% of his defensive duels and 87.5% of his loose ball duels. The above viz shows the defensive territory of the player in the last season. Josko Gvardiol averaged 21.01 duels per 90 minutes and had a 62.3% win rate. If we look at the above viz, we can observe that the player was a little bit careless as he committed 1.5 fouls per 90 minutes and conceded a penalty. However, most of the fouls were conceded in the middle third. Overall, Gvardiol covered a lot of ground on the pitch. 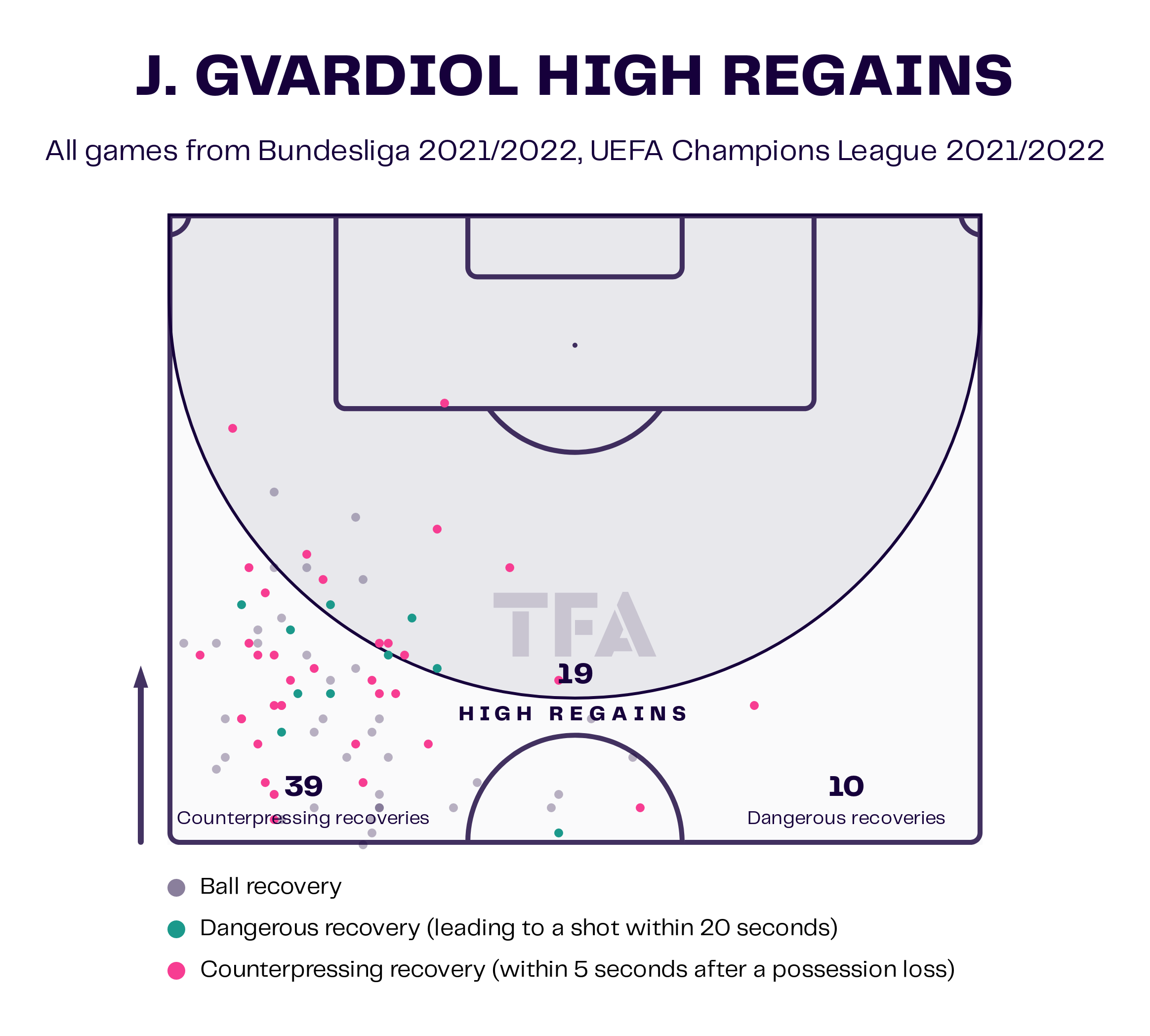 The three-at-the-back formation has allowed the players to make high recoveries. Last season, he averaged 11.5 recoveries per 90 minutes and 19 of them were made in the attacking third. A total of 39 recoveries were counter-pressing and ten were dangerous recoveries. Chelsea also play a high attacking line, and these kinds of recoveries can help them to keep their attacking momentum in the game. 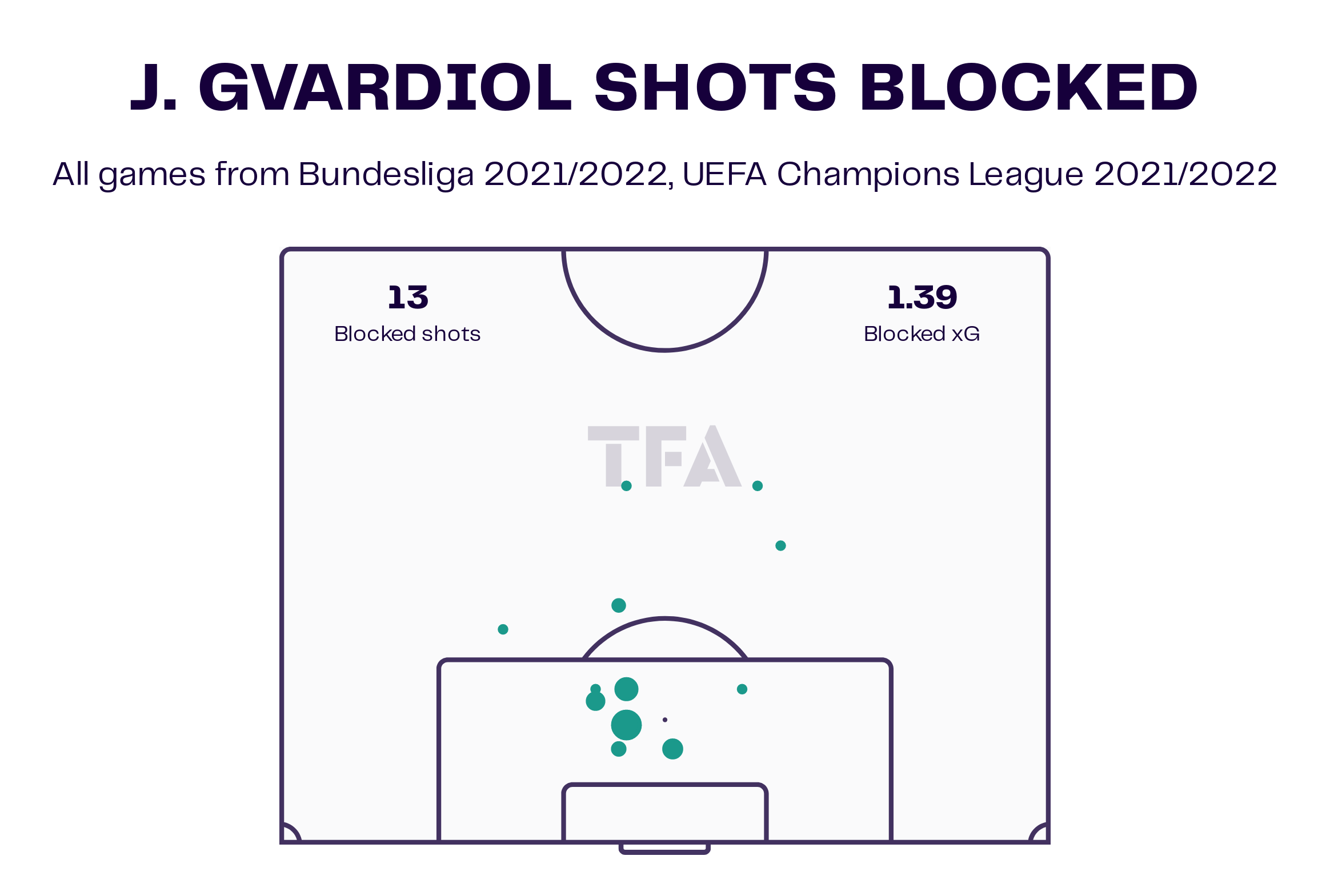 One of the most impressive stats of the player is his ability to block the shots of the opposition. The Croatian is not afraid to take a shot on his body, which is important in a league like the English Premier League. The above viz shows that he made 13 blocks last season, and eight were made inside the penalty box. 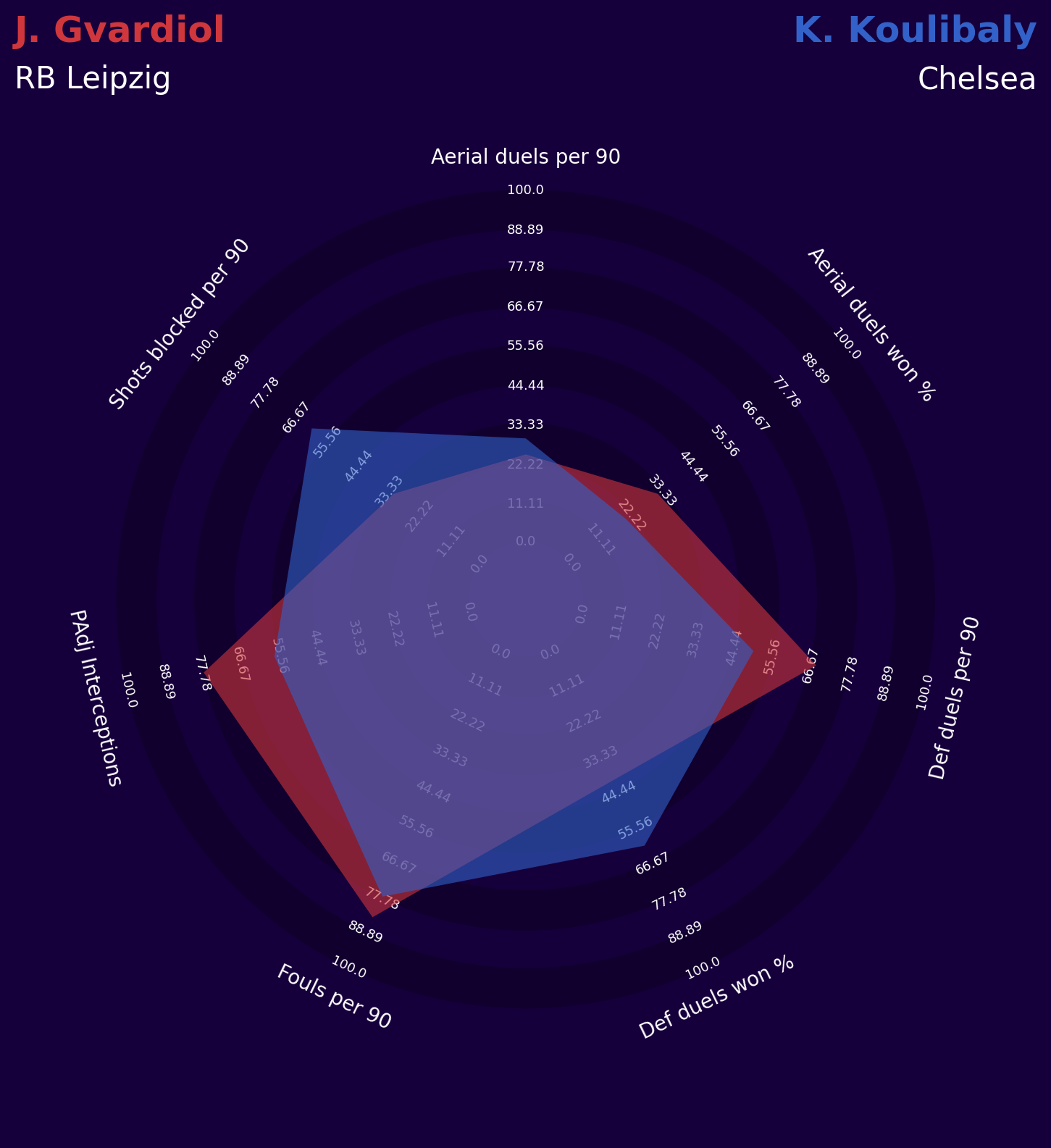 Chelsea signed Kalidou Koulibaly in the summer. The 31-year-old has struggled a bit in his first season in England, and Chelsea might replace him if the performances remain poor. The above video compares the defensive stats of Josko Gvardiol and Kalidou Koulibaly from their respective leagues. Gvardiol has a better interception, as well as aerial duels, win rate. He is a young defender and will offer more services in the future than the 31-year-old. Chelsea might think about replacing their Senagele defender at the end of the season.

Josko Gvardiol has started his career on a high and his defensive abilities have gained the interest of many clubs. Chelsea are still looking to rebuild their side and Gvardiol could be playing in a Chelsea shirt. Chelsea have a mix of young and experienced defenders and Gvardiol’s signing could secure the Blues’ backline for the future.