N’Golo Kante joined Chelsea in 2016 from Leicester City and won the league title in his first year at the club. He joined the Foxes in 2015 and helped them earn their first English Premier League title. The Frenchman won back-to-back league titles with two different clubs. He also went on to win the UEFA Champions League and the UEFA Europa League with the Blues. Kante’s dedication on the pitch was admired by his teammates and other people related to the world of football. Now, things have changed and Kante has become more prone to injuries. In the last 2-3 years, N’Golo Kante has suffered a few injury setbacks and that has kept him out of the team. This season he started in the first two English Premier League games, but injury has kept him out and Kante hasn’t featured in any of the matches since then. Chelsea have struggled without their 31-year-old French midfielder. N’Golo Kante offers a lot in the attack and the defence. He is a strong figure in the midfield. We now look at some of his stats that show how much of a miss Kante is to this struggling Chelsea side. 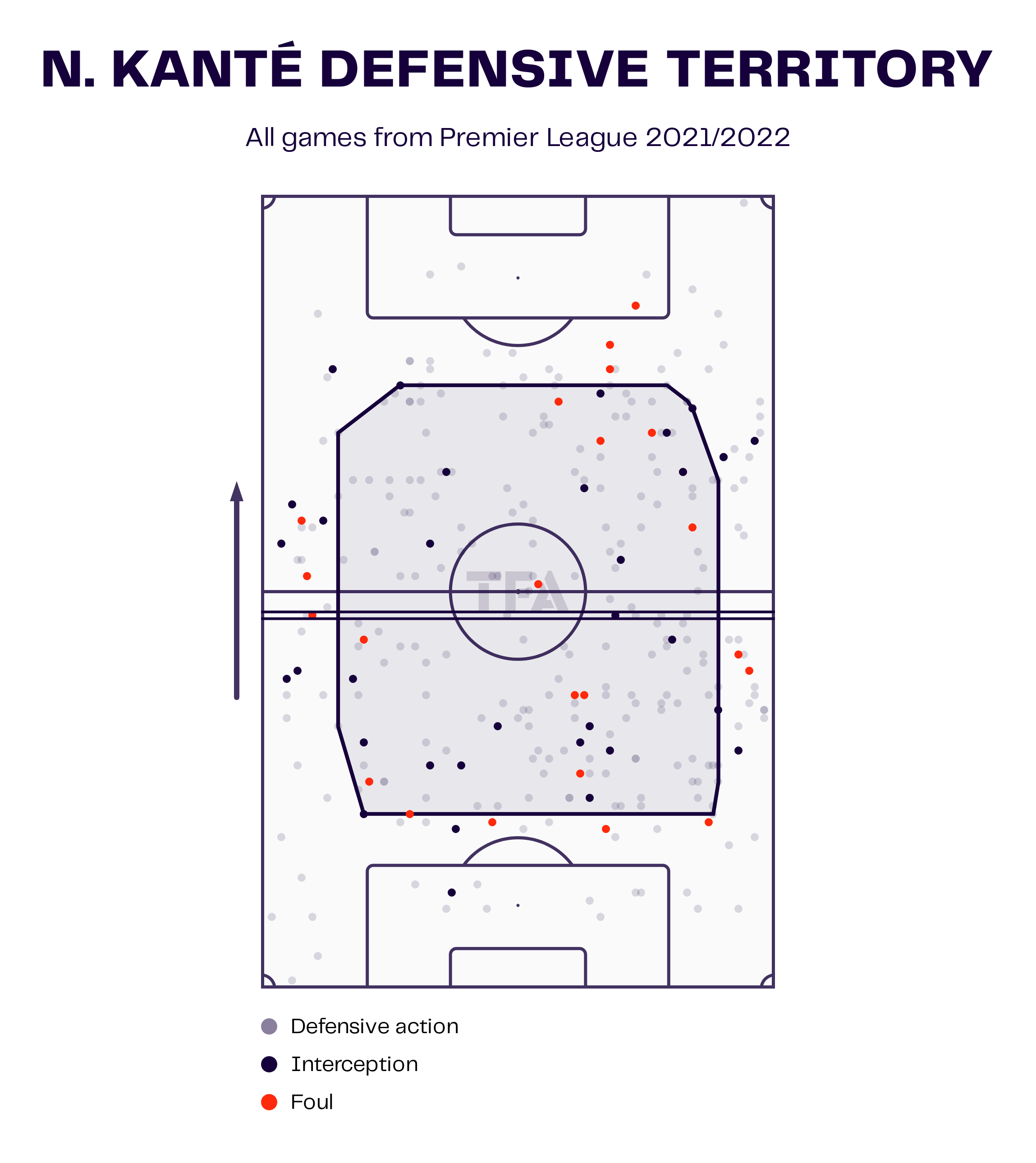 N’Golo Kante was praised for his hard work and dedication to winning back the ball throughout his career. He has been doing this consistently at the domestic as well as international level. The above viz shows the defensive territory of the 2021/22 season. Kante averaged 19 duels per 90 minutes and had a 49.9% win rate. He intercepted the ball 3.9 times per 90 minutes and recovered the ball 8.06 times, with 50% of the recoveries coming in the attacking half.

This season, Kante spent 198 minutes on the field and averaged 15.9 duels per 90 minutes. He won 51.4% of his duels and made seven interceptions. Kante also made 18 recoveries, and 55.6% of them were made in the attacking half. Kante provides stability to the defence and gets involved in the attacks. 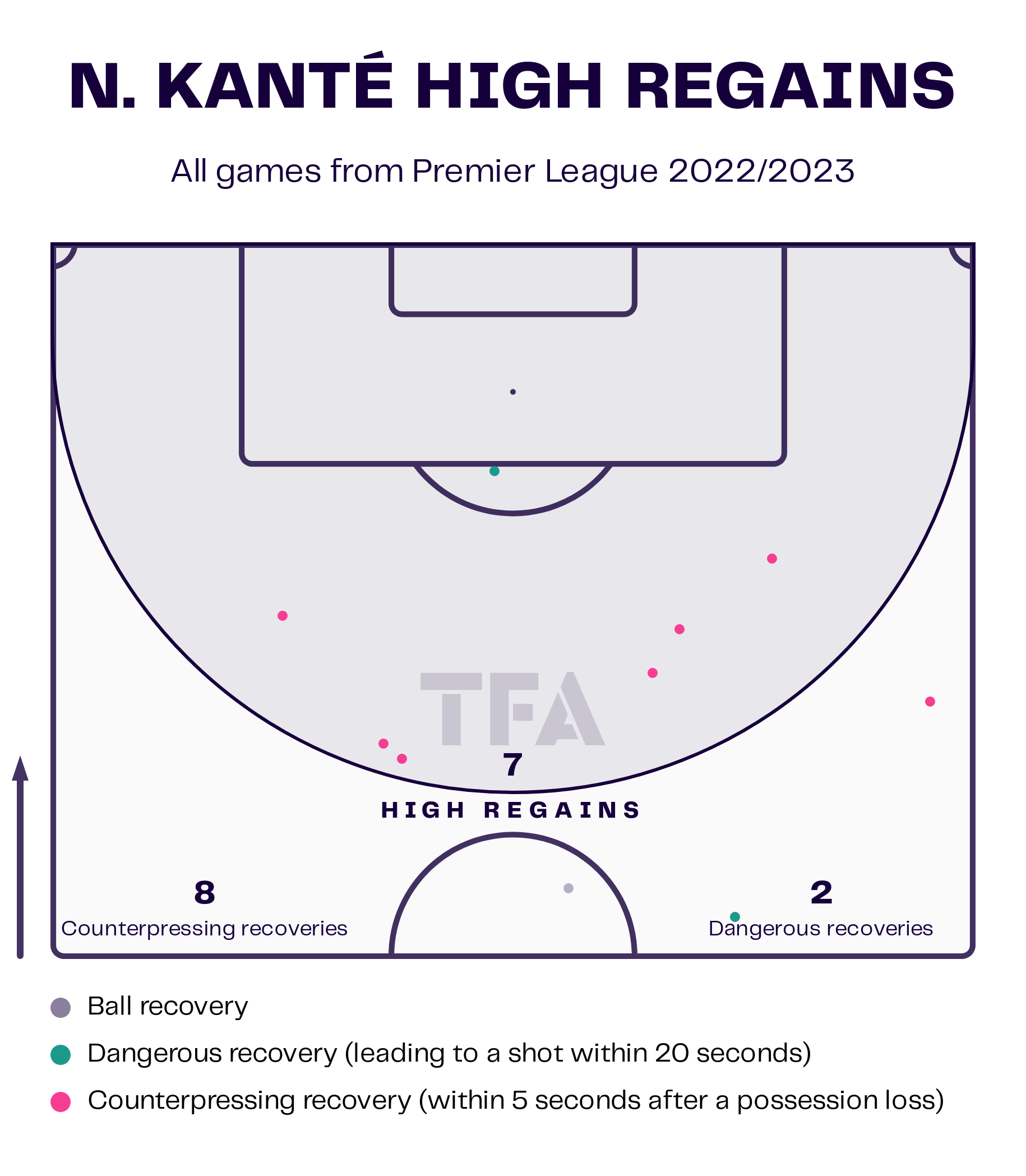 One of the areas where the Frenchman excelled this season was in making high regains. Last season he made 41 high regains in 22 appearances and this season he has already had seven in two matches. The player adapted to a more attacking role this time around, and we might see him playing a high attacking line once he comes back. 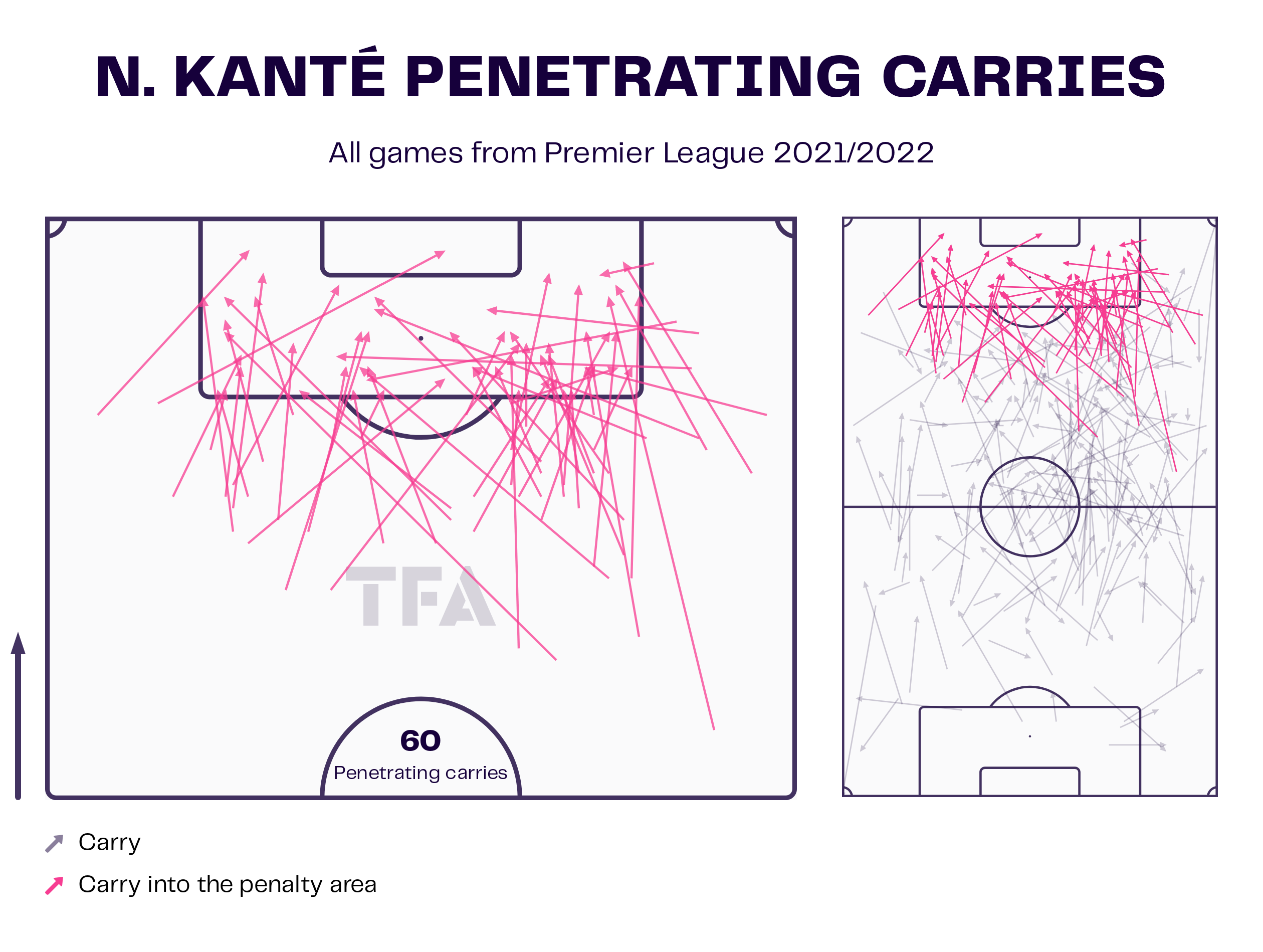 One of the areas where Chelsea midfielders have struggled is to carry the ball to the opposition penalty area. Kante made 60 such runs last season and nine have been made this season. The above viz shows that N’Golo Kante likes to run with the ball from the right side. His stamina is impressive and it never looks like N’Golo Kante is tired.

Chelsea are missing their best midfielder, and Graham Potter hopes that he gets to work with the Frenchman as soon as possible. Kante will provide an extra attacking and defensive edge to the team. Chelsea are lacking energy in the midfield and will hope to see Kante on the field soon.