Richarlison is one of the most sought-after players in English football. The Brazilian is being chased by a few English Premier League clubs and some of the other big European clubs. Chelsea is one of the teams that has recently expressed interest in the forward. Romelu Lukaku is finally set to leave Chelsea on a loan spell to Inter Milan. The Belgian forward struggled in his second spell at the London club. Thomas Tuchel has been active in the transfer window, looking for strikers who could lead the Blues’ attack next season. Richarlison has shown consistency in the past seasons and has always been on the transfer wishlist of a few top clubs. Now, everyone is looking for a move for the 25-year-old with two years left on his Everton contract. 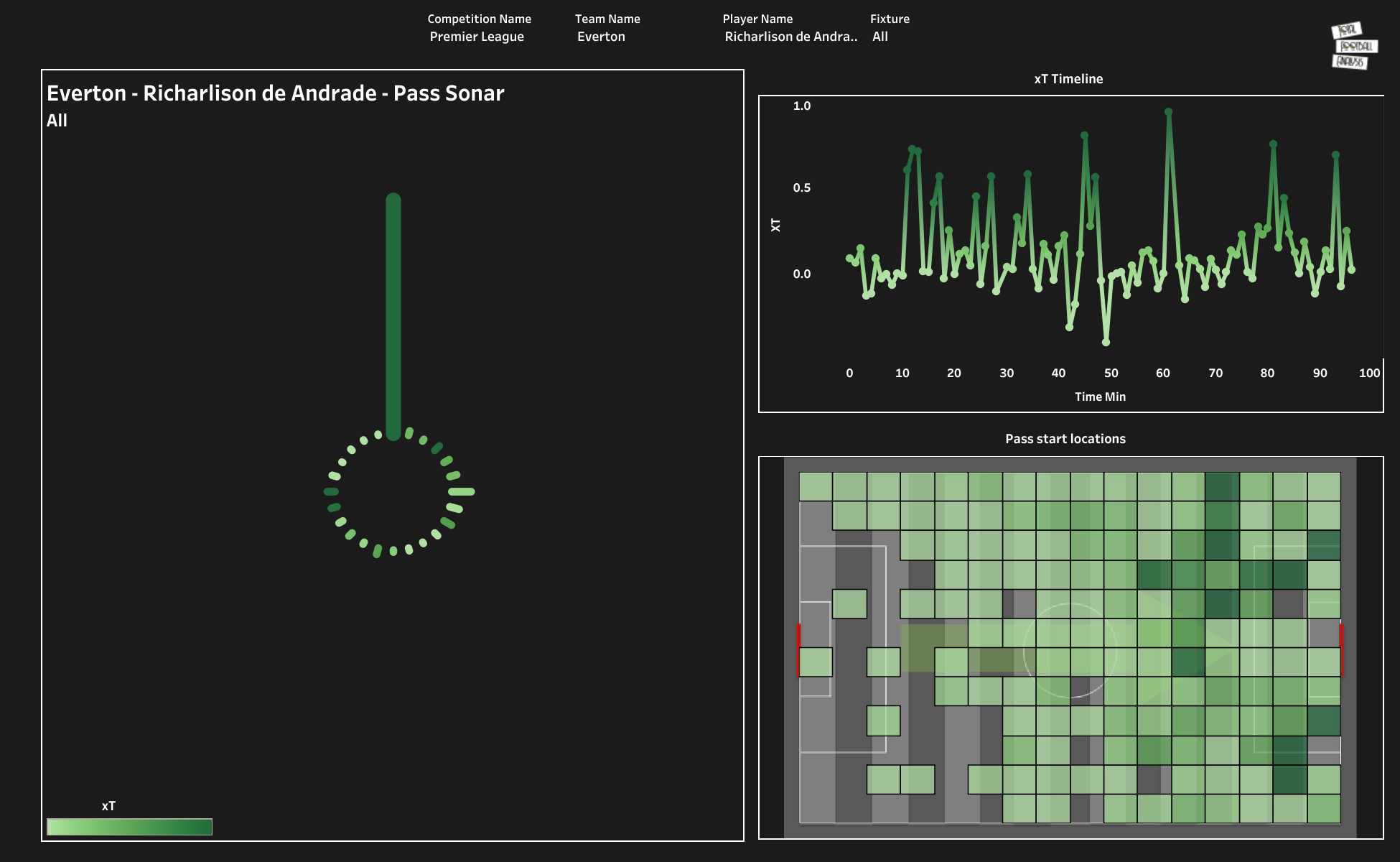 Richarlison made 30 appearances in the English Premier League last season. He usually features on the left wing but was used in the number nine role in the absence of Dominic Calvert-Lewin. This was the first season in which Richarlison played consistently right through the middle. The above viz shows the pass start location as well as the threat created from passes at different time intervals. We can observe that the forward player covered almost every area in the middle and final third. Everton struggled last season and escaped relegation towards the end of the season. Richarlison was their main threat and was involved in nine attacking actions per 90 minutes with a 44.85% success rate. 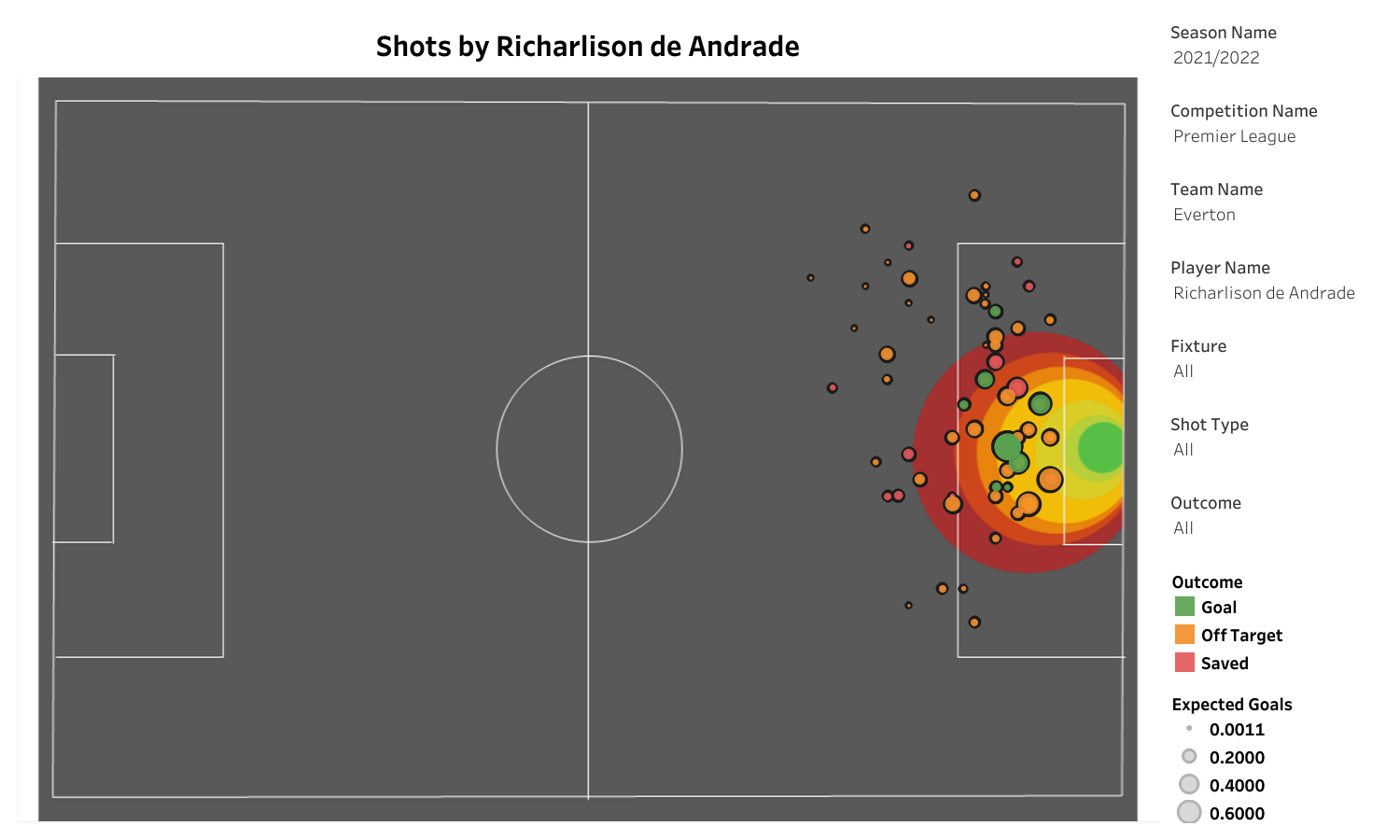 The 25-year-old Brazil international player scored ten goals for Everton in the last season. He scored three goals from the penalty spot. Richarlison attempted 61 shots throughout the season and managed to hit the target 20 times. The above shot map shows that he attempted most of the shots from his favoured left side and scored every goal from inside the opposition’s penalty box. Richarlison likes to attempt shots whenever he finds some open space in front of the goal. He also managed to hit the target with a few shots attempted from outside the box. 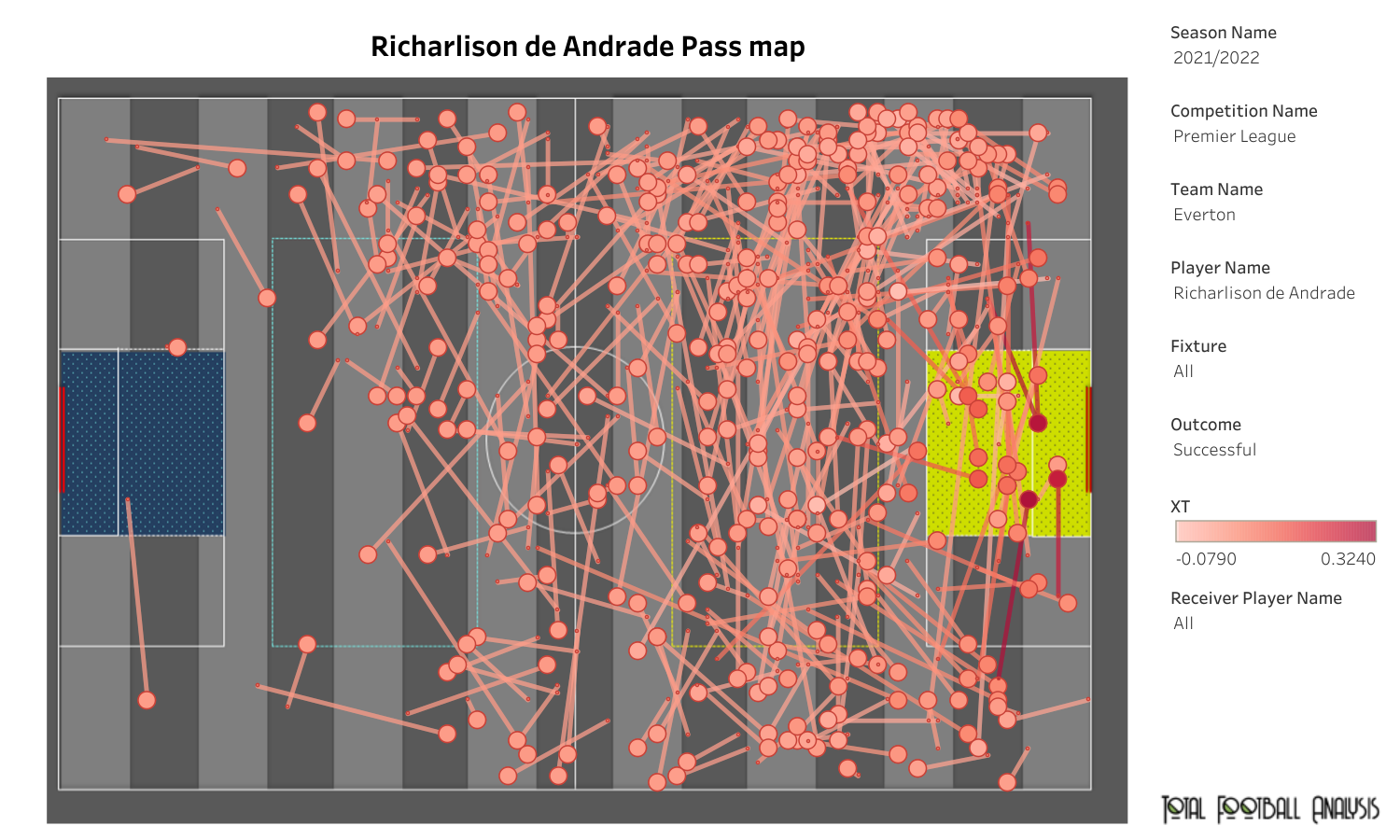 The Brazilian was effective with his passing as he assisted on five goals for the club. The above viz shows all the successful passes that were attempted by the player. Richarlison averaged 17.15 passes per 90 minutes with an accuracy rate of 66.8%. He averaged around five dribbles per 90 minutes and often used his skills in wide positions. The player managed to deliver a few passes into the opposition’s penalty box, and those passes landed right in front of the goal. Most of his passes were directed towards Alex Iwobi.

Richarlison has shown a lot of improvement in the recent past and could become a part of Thomas Tuchel’s plan. He is very flexible with his positioning. Christian Pulisic is also looking to leave the club, and Richarlison could turn out to be an alternative for him. The Brazilian is likely to leave Merseyside before the start of the season.