Chelsea will travel to Elland Road to take on Leeds United in the English Premier League. The Blues played a 2-2 draw against Spurs, which saw a lot of late drama happen on the pitch, with both managers getting a red card at the end of the match. Leeds United also played a 2-2 draw against Southampton. Both teams conceded late goals and dropped two in their respective games.

Leeds United had a good start to the season, with four points in their first two fixtures. They have scored four goals with an average xG rate of 1.12. However, the defence has struggled due to the absence of some of the key players, and Jesse Marsch’s team has conceded three goals.

Chelsea have scored three goals this season with an average xG rate of 1.5. In return, Thomas Tuchel’s side has conceded two goals and kept one clean sheet. Their new signings are starting to settle into the team, with defender Kalidou Koulibaly scoring his first goal for the Blues.

Now, let us look at the three things on the cards that we can expect in this match.

Chelsea players have found their rhythm as they dictated the play in their match against Tottenham Hotspur. The Blues were the better side in both their fixtures and showed all-around dominance. 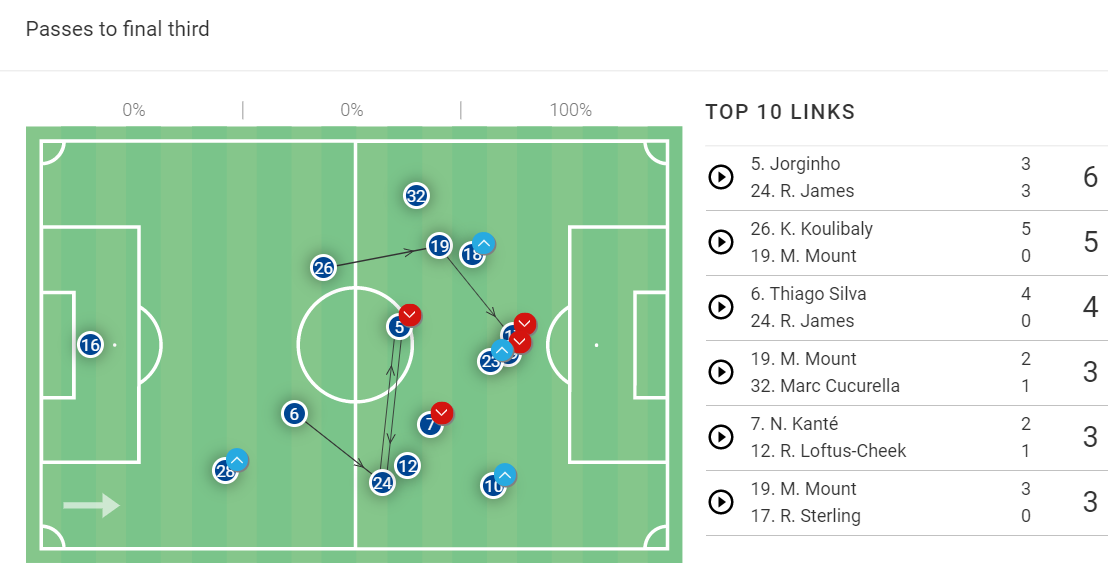 Chelsea average 550.5 passes per match with a high accuracy rate of 88.7%. These passes include around 65 passes to the final third, and the players have found a teammate 80% of the time. This has allowed them to keep the ball in crucial attacking areas, and that has troubled the opposition in their last two matches. 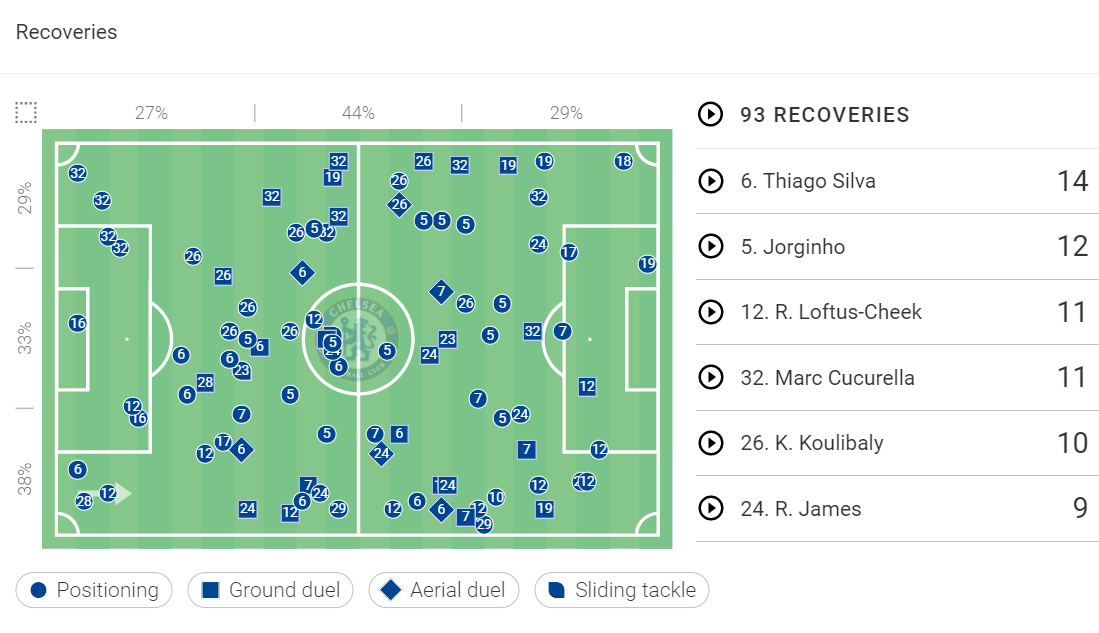 Adding to this, the Blues have a high recovery rate, and that allows them to put constant pressure on the opposition’s defence. Chelsea have made 189 recoveries in the last two matches, with 45 coming in the attacking third, 76 in the middle third, and 68 in the defensive third. This hints that the Blues are once again going to dominate the midfield battle and keep Leeds United on the back foot. 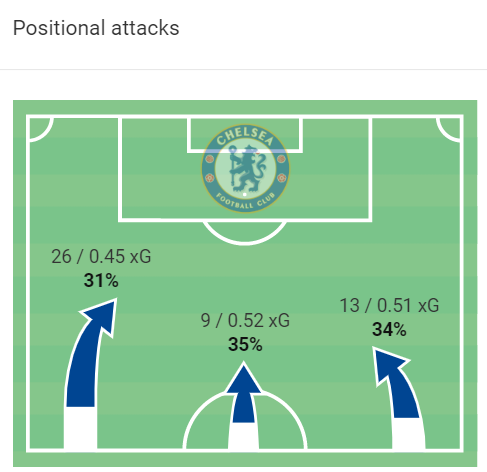 Chelsea wing-backs will carry the highest threat in this match. Marc Cucurella impressed on his league debut, and Reece James scored a goal against Spurs. The Blues created 30 positional attacks in the first match and 47 in the last match. The above viz shows the positional attack zones of Chelsea. They created more chances from the left side, with Cucurella playing a high attacking line. He attempted the first shot of the match and also made seven interceptions, along with 11 recoveries. James initially started as a right centre-back but played as a wing-back in the latter stages of the match. Both these players will carry a lot of threats in this match and Leeds United will have to deal with them, otherwise, they could easily lose three points.

The home team averages 25.5 positional attacks per match, and they have attempted 20 shots with a 45% shot accuracy rate. Leeds United average 383 passes per game but have a low accuracy rate of 78.6%. This is basically due to their long-ball tactics. They average 45 long passes with a low accuracy rate of 46%. Due to this, the team has lost the ball quite often, and that has led them into trouble. 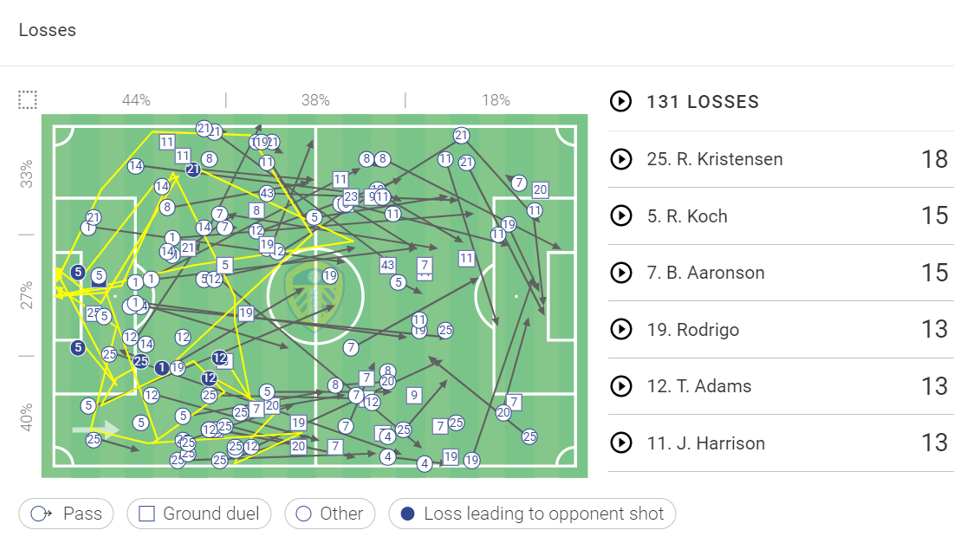 Leeds United lost the ball 106 times in the first match and 131 times in the second match. The above viz shows that the home team lost the ball most of the time in the defensive third. This led to eight shots attempted by the opposition players. This is a big concern for the manager because a side like Chelsea will easily capitalise on these opportunities and score more goals. Chelsea also have a high recovery rate, and they will be waiting for a mistake in their attacking third.

Patrick Bamford will miss the fixture against his former club. He has joined Joe Geldhart, Junior Firpo, Luke Ayling, Stuart Dallas and Liam Cooper on the treatment table.

Chelsea will be forced to make a change after N’Golo Kante’s injury has forced him out of the team. This means that Conor Gallagher could earn his first Chelsea start in the English Premier League. They will also be without their manager on the sidelines after he received a red card in the last match.

Chelsea will look to return to winning ways against Leeds United. Looking at the current form of the Blues, they look like a very solid team. They have dropped two points in the title race and cannot afford to lose more if they want to stay on the toes of Manchester City. Leeds United will have a tough evening at home and will look for an upset in this match.