Graham Potter will have a huge task on his hand going into the English Premier League and the UEFA Champions League. After being appointed as the new Chelsea manager, there are a lot of responsibilities on the shoulders of the 47-year-old. Chelsea strengthened their defence in the summer but didn’t bring in a lot of names in the other parts of the field.

The Blues made a poor start to the season and one of the reasons behind this was the form of their midfielders and attackers. The midfield is unable to produce any magic and this has forced the English manager to look for some players in these areas to strengthen the squad. One of the players who is emerging as a target for the former Brighton manager is AC Milan’s Ismael Bennacer.

Bennacer was previously linked with a move away from the Serie A champions. They were unable to sign a midfielder in the summer and the player decided to stay at the club. He has shown some improvements in his game this season. We now look at some of his stats that show why Chelsea have shown their interest in the midfielder. 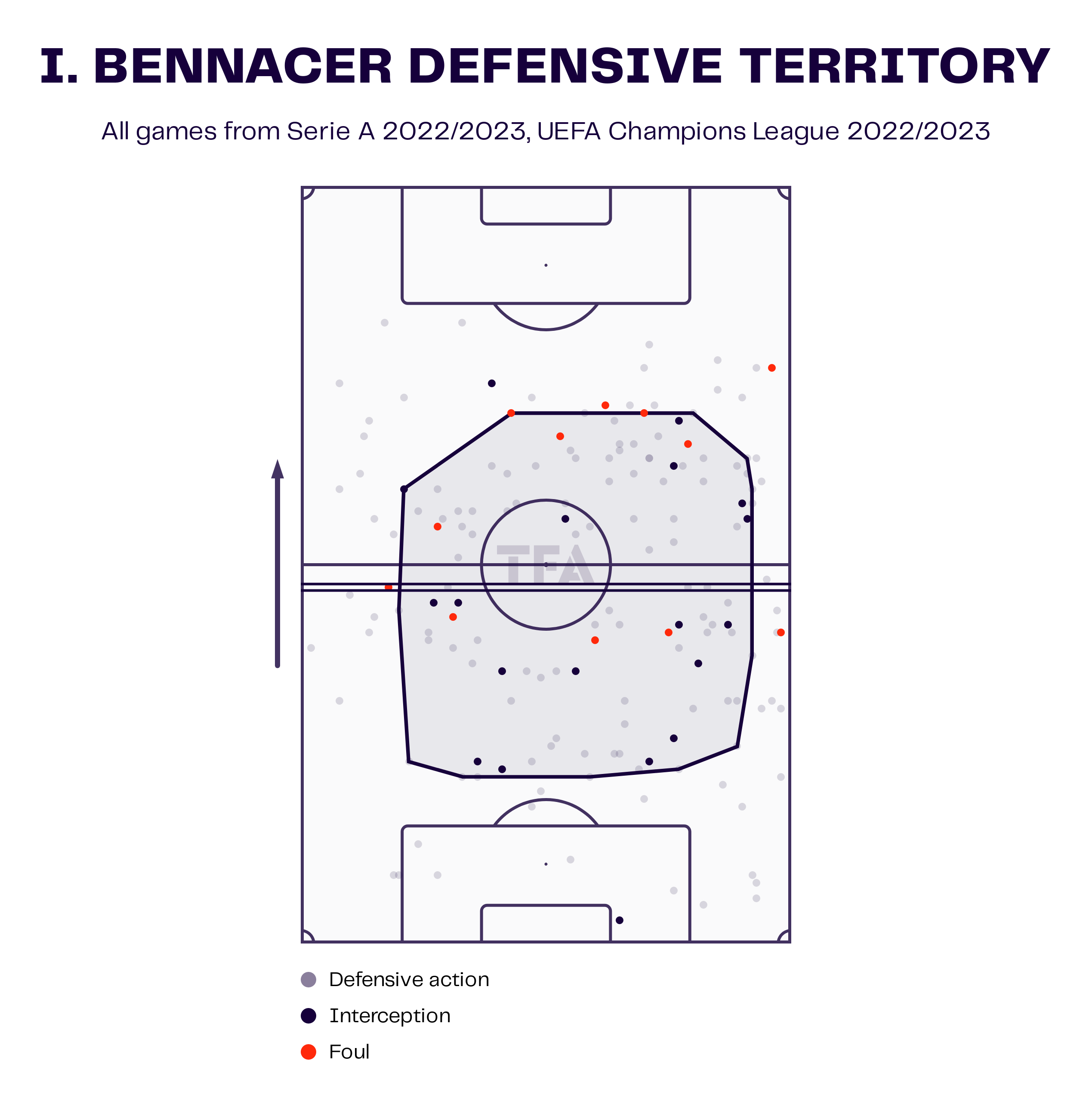 Ismael Bennacer has become an important member of the AC Milan squad this season. The 24-year-old Algerian has made nine appearances for the Rossoneri and has scored a goal for his team. He plays on the right side of the midfield two and provides more defensive stability to the team. This season, Bennacer averages 21.07 duels per 90 minutes and has a 56.2% win rate. He has won 60.9% of his defensive duels, 40.9% of his aerial duels, and 68% of his loose ball duels. The above viz shows that Bennacer has committed a few fouls this season, but most of them have been made in the attacking half. This shows that the midfielder is not careless with his tackling this season. 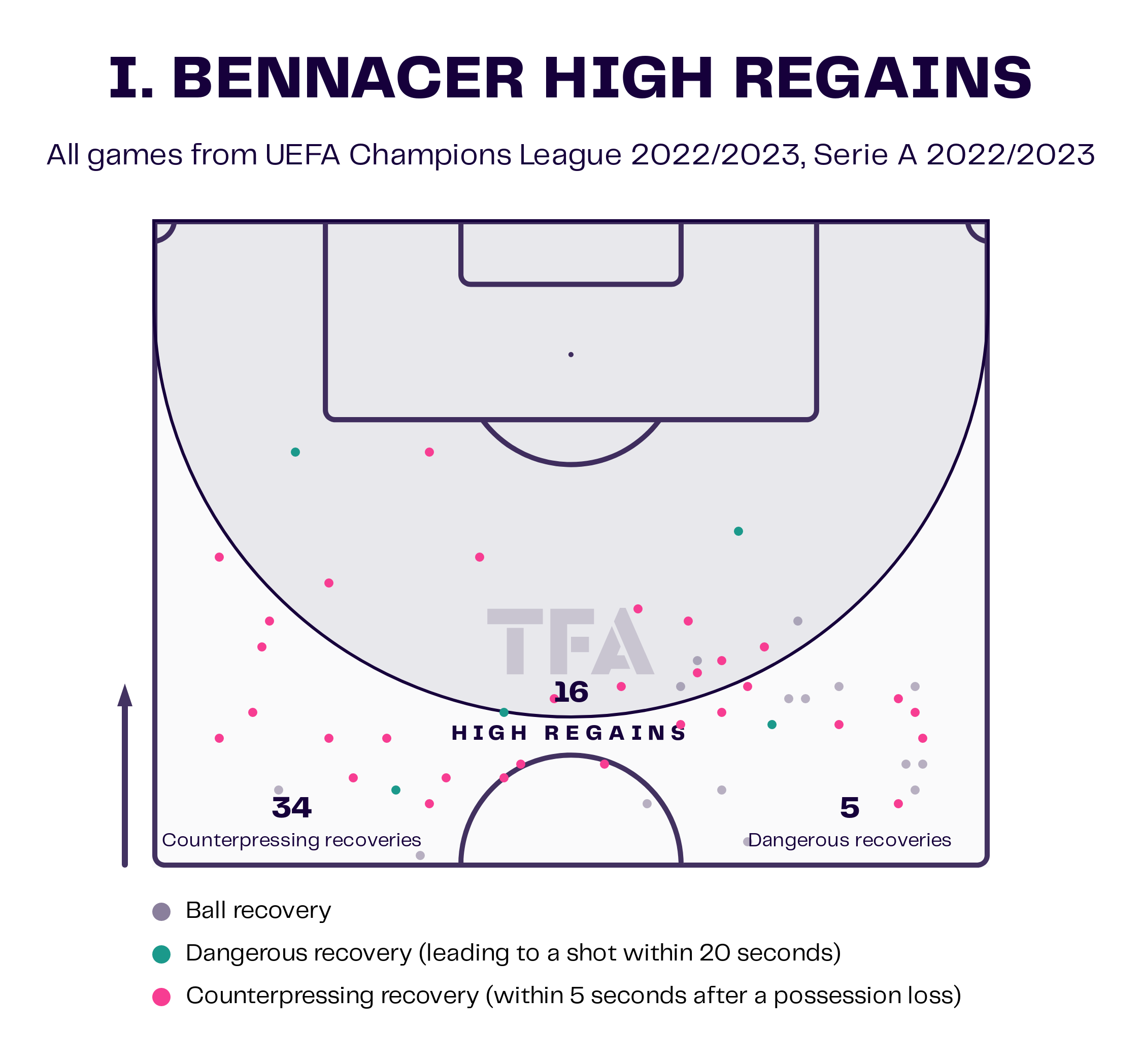 One of the areas where Bennacer has been excellent is in recovering the ball. He averages 11.47 and 57.6% of them have been inside the opposition half. Ismael Bennacer has made 34 counter-pressing and five dangerous recoveries. This shows that Bennacer likes to stay around the edge of the half while his side is attacking. 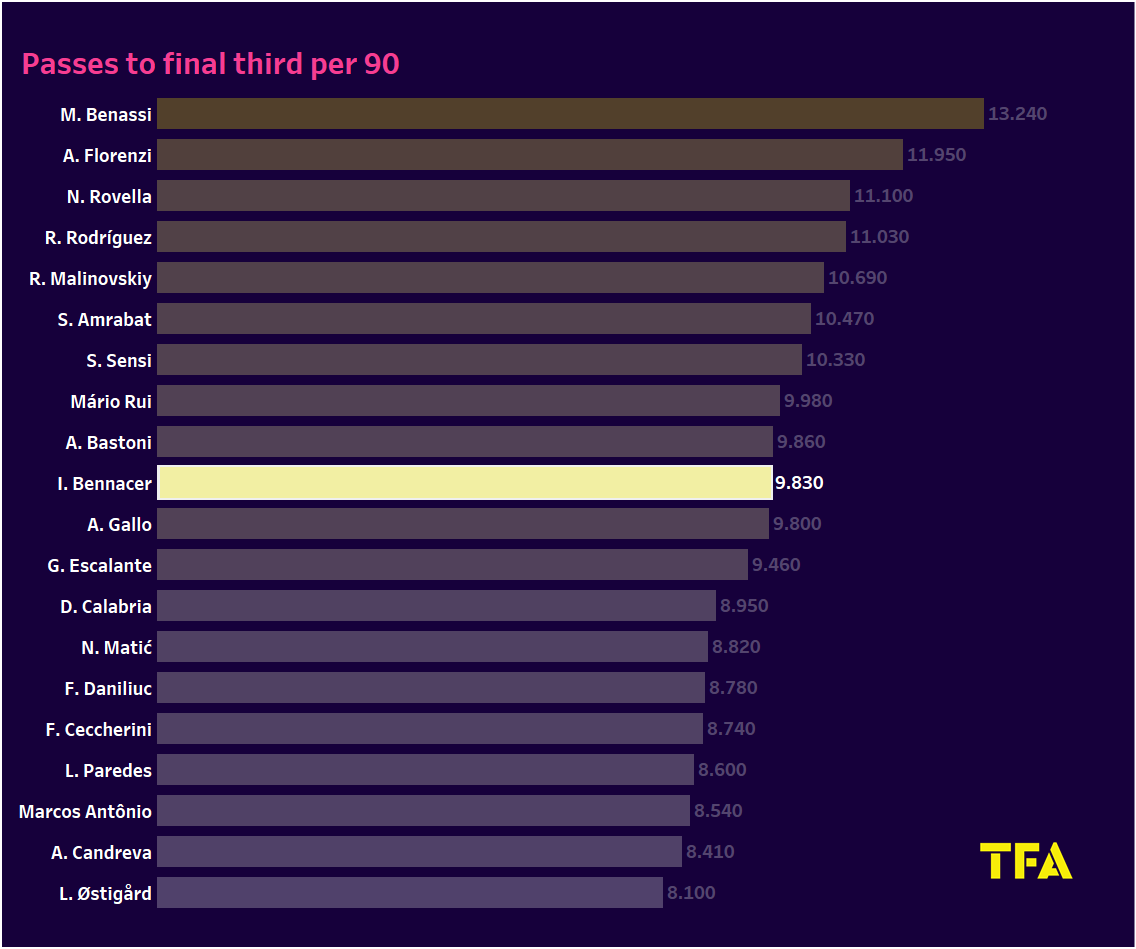 The passing stats of the midfielder have also been decent. He averages 57.34 passes per 90 minutes and has an accuracy rate of 89.8%. These include 2.99 passes to the final third, with a 41.7% accuracy rate. The above viz shows that Ismael Bennacer is highly ranked for attempting passes to the final third in the league. This shows that the player is capable of creating plays from the back. 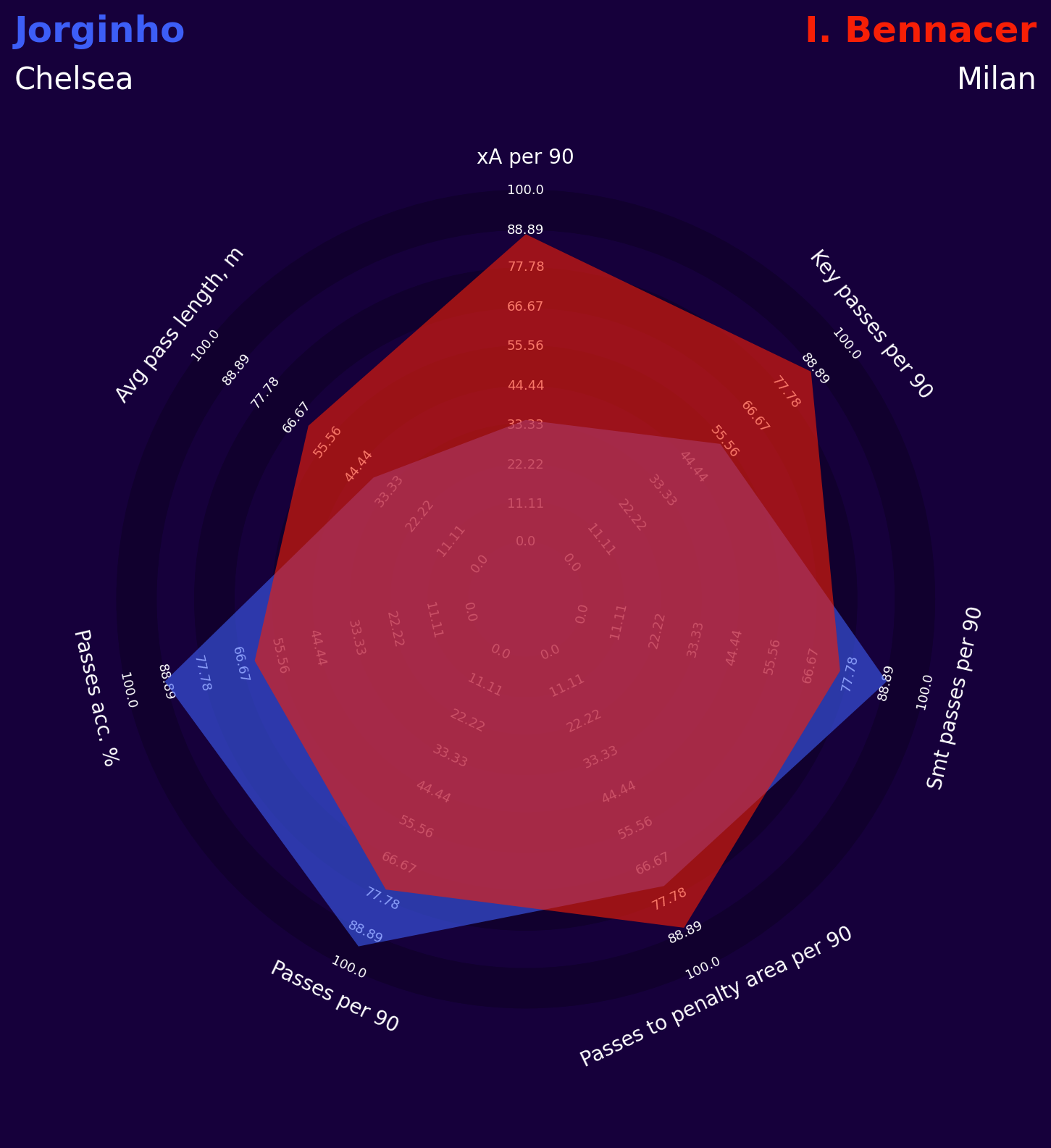 Jorginho is one of the players who has played a similar role. This season Bennacer has played better than the Italian and has better passing stats than him. 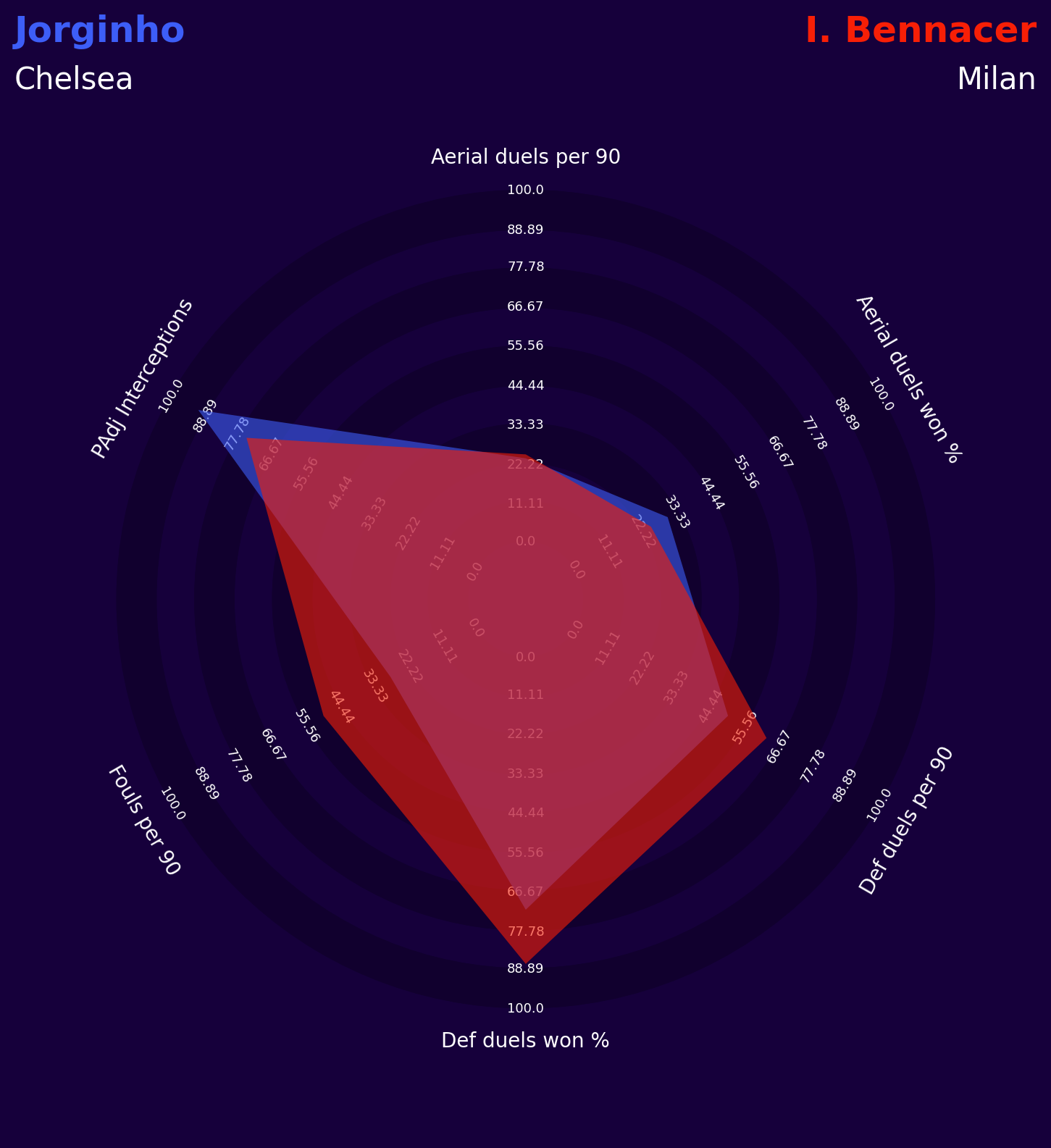 Ismael Bennacer has also performed better defensively than Jorginho this season. He has won more duels and that has allowed him to recover and intercept more balls.

The Algerian has become an important member of AC Milan’s squad. However, the Rossoneri might sell him if Chelsea offers a good price. Chelsea needs some creativity from the midfield. Bennacer might lack creativity but his contributions in the other areas could help other Chelsea players to perform well.